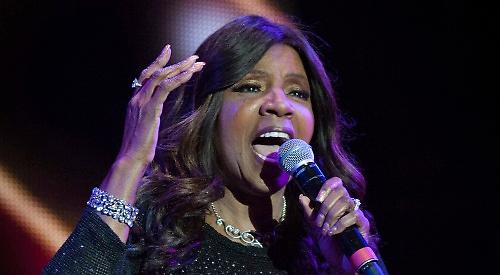 THERE were mutterings from the deckchairs on the Temple Island Meadows lawn this year about whether the Rewind South organisers could maintain the quality of artistic output, now that we were nine years on from the festival’s inception.

But judging by the ever-swelling throngs of playfully clad Eighties devotees paying homage to mullet hairstyles and pixie boots, and their propensity to gorge shamelessly on the era’s slightly over-produced rock, any fears of the above could easily be allayed.

However, no sooner had picnics been digested, that Nineties-era TV fitness trainer Mr Motivator engaged the predominantly 50-plus attendees in some less than strenuous exercise routines.

The same charge couldn’t be levelled at the performers from West End show Thriller Live, whose treatments of Michael Jackson’s hitherto live stage routines, while earnest, all seemed a little amorphous and in need of direction.

It took Big Country to get the show on the road. With the Alarm’s formidable Mike Peters at the helm, following the sad 2001 demise of former frontman Stuart Adamson, the band powered through its Scottish folk-inspired favourites including In a Big Country, Chance and Fields of Fire (400 Miles).

The juxtaposition of guitarist Bruce Watson’s insistently heavy strumming and unique bagpipe-infused tonality continue to earn the band a deserved place even in the annals of contemporary rock.

Although returning to Rewind, the I-didn’t-realise-they-were-that-good audience award on Saturday afternoon unquestionably went to Level 42.

Breezing through radio-friendly hits from their repertoire with studied precision, these jazz-funk aficionados doled out The Sun Goes Down (Living It Up), Something About You and Lessons in Love, much to the joy of the crowd.

Singer Mark King, with his infectious bass-slapping style, remained locked in an intractable groove with drummer Pete Ray Biggin, which culminated in a frantic instrumental during the Sons and Daughters finale.

With drums and bass in close proximity stage left, all moshpit eyes were laser-focused on this corner, and the duo’s parts in the improvisations were worth the price of admission alone — though there were plenty more highlights.

If not the most energetic performer of the evening, Nick Heyward of Haircut 100 nevertheless donned his rhythm guitar for a short set including Love Plus One, Blue Hat for a Blue Day and — easily his best song from the era and as a solo artist — Whistle Down the Wind. His closing rendition of Fantastic Day drew in Rewinders for an extended singalong.

There are so many fine tracks that Nik Kershaw could pluck from his recorded career for a live show that the only satisfactory way to see him perform would be during an official tour.

That said, three numbers from his multi-platinum album The Riddle kicked off the six-song set, namely Wide Boy, the tangled but dramatic Dancing Girls, and the title track itself.

Kershaw wrote the Chesney Hawkes number one hit The One and Only for the 1991 film Buddy’s Song, so it rightfully found its place in the schedule. The crowd was surely being reminded of this colossal talent, and its unrelenting chants were evidence of that.

A recorded backing track accompaniment for disco icons of 34 years, Village People — the first of two headliners — seemed not to faze anyone looking on.

Despite lead singer Ray Simpson generously explaining how to do the dance moves for YMCA, it is unlikely that a single person in the audience had somehow let this pass them by during the past three decades.

Soul-disco legend Gloria Gaynor took to the stage to round out the last portion of the final set.

Still armed with stunning vocal power, her 30-minute run included Never Can Say Goodbye and I Am What I Am.

Not surprisingly, she closed out her set and the night with the
all-time number one spurned lover’s anthem — an extended version of her 1979 mega-hit I Will Survive.

This rightly earned the star the most sustained and impassioned response from standing fans of the entire Saturday line-up.

WITH North Atlantic weather systems looming over the Remenham site by early afternoon on Sunday, the odds on whether a downpour would occur increasingly shifted from “if” to “when”.

Undeterred, a mellower throng littered the flood plain, and the relative quiet was broken by Garry Christian’s pristine voice and accompanying band The Christians.

With the crowd in distinct listening mode, and responding keenly to hits such as Ideal World and Harvest for the World, the band could easily have sustained a more drawn-out set later in the schedule.

The South (formerly The Beautiful South), showcased popular numbers from their heyday, including A Little Time and Perfect 10.

New male vocalist Gaz Birtles joined Alison Wheeler for the duets, which sounded clean and unburdened by the passing years.

Guitarist Junior Marvin led Bob Marley’s band The Wailers on to the stage and bums were quickly extricated from collapsible plastic chairs for chill Sunday afternoon boogieing to reggae greats.

Martin Ware’s British Electric Foundation provided the musical backdrop for a variety of artists, as they have done in previous years.

The troupe delivered studio-perfect arrangements for each of its collaborators, including Rozalla (Everybody’s Free) and Owen Paul (My Favorite Waste of Time). The latter’s rendition of Simple Minds’ Don’t You (Forget About Me) brought the house down.

Kim Appleby of Mel and Kim appeared genuinely touched at having been invited to perform, and Jilted John garnered the most laughs of the day with his title song’s uniquely British chorus, “Gordon is a moron”. Former Sex Pistol Glen Matlock had the audience pogoing through Pretty Vacant, while Glenn Gregory of Heaven 17 delivered the superb Temptation with its urgent chord progressions and delicious lyric.

The heavens had by this point decided to unleash, and the British summer began to tumble on to the speedily unfurled umbrellas and waterproofs.

The Rewind All Star Band now provided musical accompaniment for several acts including Sonia and Go West’s Peter Cox and Richard Drummie, who belted out lively versions of their hits Call Me, We Close Our Eyes and King of Wishful Thinking.

Belinda Carlisle’s magnificently preserved vocal cords and undisputed professionalism characterised another roll-call of chart-topping songs including Circle in the Sand, Live Your Life Be Free, I Get Weak and Heaven is a Place on Earth.

But it was the virtuoso guitar playing and robust singing voice of Midge Ure whose time with Ultravox and as a solo artist heralded the crescendo of this two-day jamboree.

His composition for Visage, Fade to Grey, a landmark moment in the history of electronica, was followed by rain-drenched punters pointing skyward religiously reciting the words to Vienna, perhaps the synthpop era’s most defining hit single.

The anecdotal high point of the festival for many was the return of Kim Wilde. While still in touring mode, she knows how to take command in a live situation.

Bounding with her usual self-deprecating charm and obviously appreciating the roars of approval, she flitted around the stage flirting with band members and the crowd alike. From the sublime You Came and yearning You Keep Me Hangin’ On to the raucous Kids in America, the application of her talents was clear for all to see.

An uncomfortably damp half hour ensued, during which the All Star Band decamped and made way for the banks of monitors, drums and keyboards for Sunday headliners Status Quo.

Despite the conditions, the increasingly muddy field lost comparatively few members of the paying public. If you hadn’t needed earplugs up until this moment, you certainly would now.

Band veterans Francis Rossi, John “Rhino” Edwards and Andy Brown blasted through What You’re Proposing, In the Army Now, Whatever You Want and Rockin’ All Over the World as part of their hour-long set — during which the lighting designer’s computerised presets came completely into their own and lit up the nighttime sky.

If Rewind was allegedly in danger of losing its appeal, that certainly wasn’t the case this year.