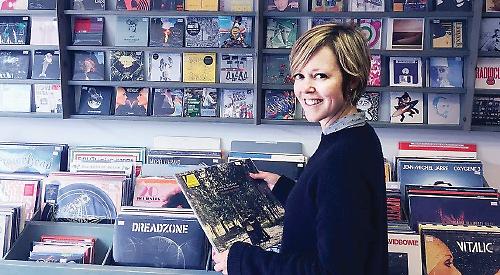 THE singer-songwriter who wrote the liltingly haunting opening theme for the hit BBC detective series Wallander is bringing her musical magic to Nettlebed Village Club on Monday evening.

Emily Barker will be performing alongside Exeter-based session musician and solo artist Lukas Drinkwater, who is known for his musical partnership with the award-winning Somerset singer-songwriter Ange Hardy.

Together, Emily and Lukas are headlining a special showcase concert presented by the Oxford-based folk music magazine Shire Folk.

With a total of four top-flight acts on the bill, the evening is set to get Nettlebed Folk Song Club’s autumn season off to a flyer.

Club organiser Mike Sanderson said: “What a start to the season! Emily Barker has been described by the Times as ‘bridging the gap between folk, country and Fleetwood Mac’.

“Her music is a blend of roots influences from country to English folk via Sixties pop, all wrapped in the rich string arrangements and
multi-part vocal harmonies of multi-instrumental trio The Red Clay Halo and spearheaded by Emily’s clear, expressive voice and her charismatic stage presence.

“As well as the Wallander theme, Emily has also provided the theme music to BBC TV drama The Shadow Line and has recently, in collaboration with Martin Phipps, composed music for Daniel Barber’s film The Keeping Room, as well as her first feature-length soundtrack for Jake Gavin’s UK road movie Hector, starring Peter Mullan.

“Emily’s most recent album with The Red Clay Halo, Dear River, was critically acclaimed across the board, with four- and five-star reviews including lead reviews in the Times and Evening Standard. It went on to be voted ‘Americana Album of the Year’ by readers of the UK’s
foremost roots music website
Spiral Earth.”

Support on the night will
come from the multi-award-
winning duo Ninebarrow, Fatea magazine album of the year
winner Steve Pledger, and
Nettlebed regulars Jackie
Oates and Megan
Henwood.

Megan, the
daughter of
Henwood and
Dean boatbuilder
Colin, is preparing
to release her third
solo album, River,
on Friday, October
27. To mark the
occasion she will be returning to Nettlebed on Monday, October 30, to support Chris While and Julie Matthews.

A week later, her first solo headline tour of the UK will see her play South Hill Park in Bracknell on Wednesday, November 8.

In the meantime, she and Jackie Oates are playing the Unicorn Theatre in Abingdon on Thursday (September 7), with support from Ryan Crowe.

Doors open at 7pm with the support act on stage at 7.15pm and the main act at 8pm. Tickets are £14 and can be booked online at www.musicattheunicorn.org.uk

The Crooked Billet’s full, regular menu will be available on the night and there will be a £15 music cover charge. For table reservations, call (01491) 681048.

Looking ahead to the coming season of Monday night concerts at Nettlebed, the full list of dates has just been announced, with Chris Leslie booked to play the High Street, Nettlebed, venue on Monday, September 11.

Mike Sanderson said: “Chris has spent his life playing violin and mandolin. He is also a great singer-songwriter currently with Fairport Convention, Feast of Fiddles and St Agnes Fountain.”

The following Monday (September 18), it is the turn of folk club patron Phil Beer, of Show of Hands fame, to present a showcase of his own.

“Phil will of course be performing himself as well!” added Mike.

All Nettlebed concerts start at 8pm. Tickets for Monday’s Shire Folk showcase are £15 in advance and can be booked by calling 01628 636620. For more information, visit www.nettlebedfolkclub.co.uk