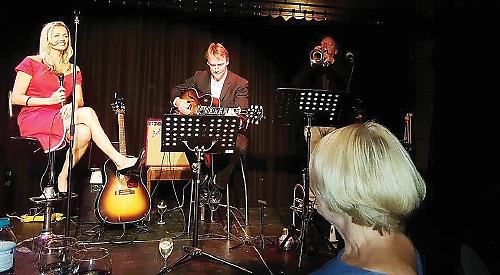 For Rebecca, who grew up in Nettlebed, the dream of setting up a jazz club in the heart of Henley had come true.

The venue, set in the intimate surroundings of the Henley Operatic and Dramatic Society’s rehearsal studio and accessed in the best tradition of the world’s great jazz clubs via a narrow passageway — beside the Kenton Theatre, in this case — may be one of Henley’s best kept secrets, but not for much longer.

Word is sure to quickly spread that Purdy’s Pop-Up Jazz Club is the place for those seeking a party atmosphere with high-class, musical entertainment from the giants of UK jazz.

Though Rebecca admitted to moving beer crates just half an hour before the club’s opening, she looked sensational when she took to the stage, illuminating the club with the warmth and good humour of her glowing personality.

Her musicians, Stuart Henderson on trumpet, percussion and vocals, guitarist Hugh Turner and Paul Jefferies on bass, looked ready to meet any challenges the evening might offer.

Blessed with crystal-clear diction, even at the fastest tempos, Rebecca has the special quality of being able to interpret songs from a wide variety of styles and genres, and makes sure that there is something for everybody in her repertoire.

The wonderfully dramatic Minnie the Moocher — in which she was assisted by the growl of Stuart Henderson’s muted trumpet — positively oozed with sleaze.

The hilarious Put the Blame on Mame had everyone in stitches of laughter as Rebecca recounted the adventures of a lady whose amorous activities were said to have caused many of America’s worst catastrophes — the San Francisco earthquake being just one.

Above all, Rebecca is a great songwriter, with a sensitive lyricism naturally in tune with growing up in the countryside and young love, as well as the darker elements of human relationships.

Underneath the Cherry Tree, which featured a wonderful duet with Paul Jefferies on bowed double bass, had a lovely pastoral feel, while I Know That You Know had Hugh Turner’s country-style guitar well to the fore.

Too in Love with Love cleverly incorporated the old favourite When You’re Smiling, and everyone had great fun joining in with the words.

Several of Rebecca’s original compositions will soon be available on an album, recently recorded with a full string orchestra at the famous Abbey Road Studios, where the Beatles recorded many of their greatest hits.

The singer is supported by three outstanding musicians — the rock-steady time and beautiful basslines of Paul Jefferies, Hugh Turner’s subtle rhythms and inventive leaps into the stratosphere on guitar, and the burnished tones of Stuart Henderson’s trumpet — not forgetting his percussive work on snare drum and cymbal, whistling and occasional vocal backing to Rebecca.

What a team! The on-stage understanding between these guys was almost palpable.

The evening came to a climactic ending with The Love Cats, a huge hit for The Cure in October 1983.

It remains to say a well-deserved thank you to the team of family and friends who manned the bar, and no doubt put in a huge effort behind the scenes, and to Bruce Smith, a sound and lighting man par excellence.

Rebecca intends that Purdy’s Pop-Up Jazz Club will open its doors on the first Saturday of each month, which means that it will next do so on October 7.