'Songwriter of a generation' has nothing to be shy about 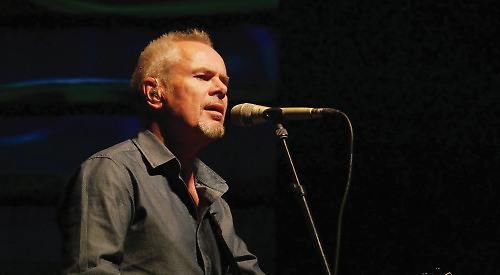 PERHAPS it puts the world of celebrity into context when you hear a once huge
59-year-old pop artist telling a 225-strong audience at Norden Farm in Maidenhead that he couldn’t pluck up the courage to introduce himself to his hero David Bowie on no less than three occasions.

The first of these was at Live Aid in July 1985 — a performance Nik Kershaw readily admits was “absolutely terrifying” and at which he didn’t feel he was in as prestigious a league as other members of rock’s royalty. So much so that he was reluctant to line up in the front row on stage for the finale.

But seeing as Elton John has described Kershaw as “the best songwriter of a generation”, he needn’t have worried.

It’s always refreshing to hear such an artist do his thing in “unplugged” mode, here accoutred with nothing more than a Taylor T5 acoustic/electric guitar, a few effects boxes, and a loop pedal. Removing the complex recorded arrangement for a song like Dancing Girls — tonight reduced to a deliberative carousel waltz — highlighted the lyric’s plaintiveness. Don Quixote, Kershaw’s commentary on Eighties excess and aspiration, now sounds like a shuffle with a suggestion of flamenco guitar.

If there is a sardonicism or sense of injustice carried through in many of the songsmith’s lyrics, they also form the basis of his sharp wit — which characterised a series of hilarious anecdotes conveyed to the audience in between numbers.

A line of three video screens on the rear wall continually misspelled his name with anagrams — including the clear favourite of the evening, “Nikker Wash”.

Kershaw’s voice was piercing and obviously unspoilt since his prime time, particularly shown off in the sustained and vibrato-inflected chorus notes of Die Laughing from the 2001 album To Be Frank.

Throughout a generous 22-song set, he dispatched several of the best-known singles from his Eighties albums Human Racing and The Riddle, while rightly trusting an attentive audience with works from more recent years.

The Sky’s the Limit, written for his daughter, the apparently much requested but delightful B-side So Quiet, and Billy from the 1999 album 15 Minutes, with its cutting lyrics, all stood out.

To round off a great evening, the singer invited fans for a meet-and-greet in the lobby after the show for autograph signing and photos.