Cinderella as you've never seen her before was an operatic gem 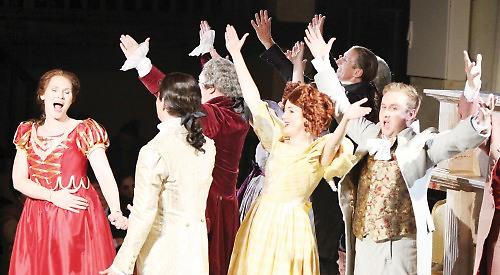 THE second Diva Opera performance in this year’s programme at the Great Barn in Fingest was a gem.

Rossini’s take on the classic fairytale Cinderella is the triumph of goodness over vanity and jealousy but with a few surprises.

The wicked stepmother becomes the pompous stepfather Don Magnifico. There is no fairy godmother — instead it is the Prince’s tutor and philosopher Alidoro whose job it is to get Cenerentola to the ball.

There are no magic pumpkins and carriages. Nor is there a missing slipper — rather a one-of-a-pair bracelet given to the Prince by Cenerentola.

What there was, though, was excellent music and entertaining comedy throughout. The singing and the piano accompaniment was of a very high standard.

The coloratura, which is central to Rossini’s writing and technically very demanding, was performed brilliantly by the whole cast. What can be a distraction when the technical difficulty shows was a joy in this performance.

Ashley Catling’s Prince was strong and passionate and Matthew Hargreaves had a commanding stage presence as Alidoro.

There was some exceptional comic acting from Julien Van Mellaerts as Dandini, enhanced by the rubato of his coloratura for dramatic effect.

Also from the three footmen who, as a concession to the original fairytale, act half mice, half horses as they propel Cenerentola to the ball.

Special mention goes to Marta Fontanals-Simmons as Cenerentola herself, whose final aria in particular was breathtaking, effortless in its runs and leaps across the vocal range.

The comedy of the piece was enhanced through the attention to detail in the costume and the choreography.

On an almost bare stage, ringleted wigs, gold and silver brocade coats, satin ribbons and bows were a riot of colour.

The two sisters played by Charmian Bedford and Louise Mott swished about like French and Saunders — pantomime dolls in bright yellow and purple dresses, rouged cheeks and red curls.

All is not right with the world as the lowly servant girl appears at a society ball.

A raft of comic effects — rattling crockery, whirling dining table and mock-puppetry — created a topsy turvy world of confusion which had the audience gasping and laughing.

This was altogether a highly professional and fun production. Look out for more opera at Fingest next September.