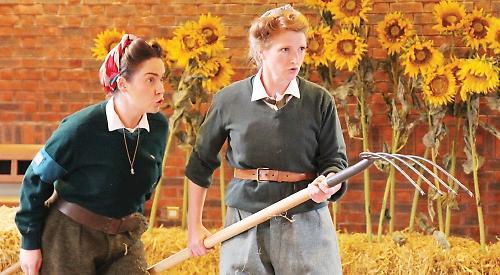 EVERY time I attend an Opera Prelude event in the glorious surroundings of Fawley Barn, I leave impressed with the talent and commitment of these young artists.

This year’s touring production of Mozart’s Così Fan Tutte in association with Opera Holloway was no exception.

A cast of six played out the comic tale of wit and deception to some of Mozart’s most loved opera tunes.

Director Fiona Williams’s production is cleverly set in 1943 during the Second World War.

The action takes place on a farm where two young women, Fiordiligi and Dorabella, have just completed their Women’s Land Army training.

Their fidelity is tested by their soldier lovers, Ferrando and Guglielmo, as they pretend to leave for battle.

Egged on by their friend Don Alfonso and his accomplice Despina, they return in disguise in an attempt to woo them and prove that “all women are like that” — English for “così fan tutte”.

Polish-born bass singer Przemyslaw Baranek had a fine voice and was convincing as the scheming Don Alfonso. We always enjoy soprano Callie Gaston’s fine articulation in this repertoire and here again, as Fiordiligi, her fast passages were excellent.

Mezzo-soprano Sophie Dickson’s mellow vocal tones and lively facial expressions as Dorabella made us really believe her grief at losing her lover to battle.

There was some good comic acting from the two lovers, Tom Morss and Jevan McAuley. However, in spite of an entertaining Ross Poldark-esque “scything” moment, I felt they could have been more bristling and swashbuckling in their attempts to woo the two ladies.

Under the sensitive direction of conductor Lewis Gaston, the orchestral playing was light and neat and really made the performance.

There was good ensemble between the string players, all graduates of the Royal Academy of Music, and pianist and Opera Holloway co-founder Laurie O’Brien.

Both singers and players managed well the difficult sight lines due to the long narrow performance space.

The minimalist set made clever use of the tight space with its setting of a vegetable garden with hay bales, garden tools and sunflowers.

Altogether a highly enjoyable and polished show, performed by really talented young opera singers and loved by an encouraging and supportive audience.

Opera Prelude runs a programme of recitals and lectures throughout the year. For more information, visit www.operaprelude.com