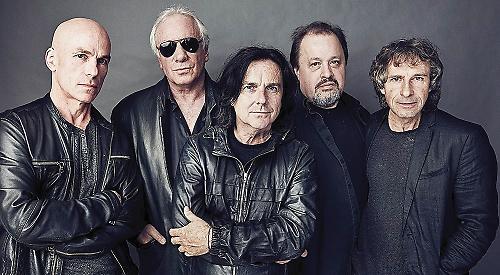 AYLESBURY rockers Marillion have announced plans to play the Hexagon in Reading next spring — after selling out their October 13 show at the Royal Albert Hall in just four minutes.

The neo-prog band, which formed in 1982, are currently enjoying a run of success that saw their crowdfunded 2016 album FEAR hit number four in the UK album charts.

This marked their highest placing since 1987’s Clutching at Straws — their fourth album and the band’s last with original lead singer Fish — peaked at number two.

Marillion frontman and lead songwriter Steve Hogarth said: “I have been part of this band now for 27 years and it barely feels like 10. I think we’re as inspired as we ever were and we’re still enjoying creating together. Luckily our music has remained free to evolve and change without the constraints of a corporate music business which might otherwise have killed us.

“By reinventing the business model we have maintained a one-to-one relationship with our fans and that feeling is never more apparent than at the live shows.

“It’s always a pleasure to share a room with ‘the family’ and exchange the passion on stage with the passion off-stage. We’re playing a few places we haven’t visited in a while. It’s long overdue and we’re really looking forward to this little outing.”