Youth orchestra's coming to town to celebrate a century of jazz 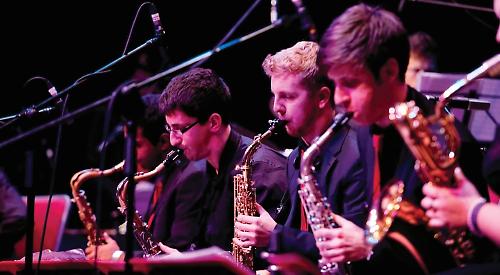 THE internationally famous National Youth Jazz Orchestra is returning to the Kenton Theatre for an eighth concert on Friday, November 3, following the previous sell-out performances.

Each concert has had a theme and after celebrating the orchestra’s 50th birthday in 2015 and a memorable look at “Then and Now” last year, this year NYJO is celebrating 100 years of jazz itself with “A Jazz Centenary” concert featuring a remarkable selection of NYJO arrangements of the many jazz styles involved.

So how did it all start? Much of the early development of jazz — originally “jass” — is lost in the mists of time, but there is one point on which most music historians agree.

That is the first commercial recording session that produced a record which nowadays is recognisable as jazz and which happened on February 26, 1917, in a New York studio of the Victoria label.

It featured the Livery Stable Blues played by the Original Dixieland Jazz Band led by Nick LaRoca. It was an instant hit and was followed by dozens more.

For this special Kenton concert, expect a swinging variety of NYJO creations on a journey through the Dixieland, swing and bebop periods with some modern funk and Latin numbers showing how the heritage and vibrant diversity of jazz is embedded in this young and energetic 22-piece orchestra.

The diverse music featured will include numbers made famous by Louis Armstrong, Duke Ellington, Dizzy Gillespie and Buddy Rich.

The year 1959 was a pivotal one in the journey of jazz when three LPs had a major influence on the way ahead. These were Dave Brubeck’s Time Out, Miles Davis’s Kind of Blue and Ornette Colman’s Shape of Jazz to Come. Expect to hear NYJO artistic and music director Mark Armstrong’s special arrangement of Tiger Rag also.

NYJO has developed apace over the last five years under executive chair Nigel Tully and artistic and Armstrong — a renowned trumpet player who is also Jazz Professor at the Royal College of Music.

The orchestra’s structure has been developed nationally to attract more young musicians and to encourage their development and progress.

There has been a strong focus on sponsorship and fundraising. In particular, NYJO has been awarded four further years of funding as a national portfolio organisation from the Arts Council England — amounting to £125,000 a year from 2018 to 2022. This will provide a solid foundation for NYJO’s ambitious plans, which include touring and educational projects in areas of the country where jazz is currently under-represented.

NYJO is proud to play its part in the council’s mission of enabling great art and culture for everyone.

As Armstrong put it: “This core support shows that jazz is slowly but surely taking the place it deserves among the highest respected art forms.” At the orchestra level, Graham Russell Drums of Fareham have given a drum sponsorship — presenting a new drum kit every year to the principal orchestra.

In addition to the orchestra, the organisation also operates the weekly NYJO Academy which contains several training bands, a vocal ensemble and a nationwide series of inspirational workshops and educational events intended to inspire children and young people with a love of music and jazz.

Over the years the orchestra has helped launch the careers of many of the UK’s most renowned jazz musicians, including Guy Barker, Mark Nightingale, George Presencer and Courtney Pine

The principal orchestra gives about 40 concerts annually in the UK and tours extensively internationally. It has performed at Buckingham Palace, at the BBC Proms, has a yearly residency at Ronnie Scott’s and frequently stars at the London Jazz Festival. During the years of its existence it has also produced more than 40 albums.

So what a marvellous opportunity it will be to see this remarkable orchestra in the flesh — perhaps again? — and to celebrate a unique centenary.

Come and experience NYJO’s own style and energy through it’s arrangements and sparkling performances as it traces the intriguing journey of the first hundred years of jazz.

A point of special interest is the relationship NYJO has developed with its counterparts in Germany and Holland — BuJazzO and NJJO. This project came into being as “Three Nations Under One Groove”.

In September 2016 all three orchestras met for the first time to celebrate the ideas of freedom and partnership of Europe’s youth and to lay the foundations of a pan-Europe jazz community.

The project took the form of a joint workshop at the Heek Conservatoire in North Rhine-Westphalia and a four-date concert tour of Germany and the Netherlands.

Both orchestras came to England last March, strengthening the cultural bond and playing together with NYJO again in concerts in Nottingham, London and Gateshead.