Young tenors are up for the cup at Kenton 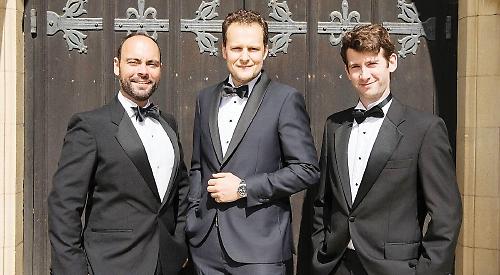 SAY the words “Italia ’90” and what comes to mind? Gazza’s tears and the nerve-shredding penalty misses of Stuart Pearce and Chris Waddle in England’s semi-final defeat to Germany would top the list for many.

Once the dust had settled, however, our second-greatest World Cup campaign ended up having another quite separate cultural legacy — courtesy of the BBC’s decision to use Luciano Pavarotti’s 1972 recording of Puccini’s Nessun Dorma as the theme music of its coverage.

The aria, taken from Turandot, subsequently reached number two in the UK singles chart and was to remain the tenor’s trademark song while going on to become a sporting anthem known to millions worldwide.

By coincidence, at the time of his chart success, Pavarotti had just joined forces with fellow tenors José Carreras and Plácido Domingo to stage a “Three Tenors” concert at the ancient Baths of Caracalla in Rome on the eve of the World Cup final.

The album of the concert went on to outsell all other classical recordings worldwide, creating something of an opera boom in the process.

Purists probably gave it a miss, but thousands flocked to Pavarotti’s free concert in Hyde Park in July 1991, while the Three Tenors later played Wembley Stadium in 1996.

Much of which sadly passed Alex Haigh by — as he was only two years old in 1990. But two decades on from the Three Tenors’ heyday their influence continues to be felt.

Nowhere more so than at the Kenton Theatre, where next Saturday (October 28) Alex and fellow tenors Richard Dowling and Alberto Sousa are staging a “Three Tenors” concert of their own.

Alex said: “I never had a chance to see them live but what inspired me originally was their focus and concentration, whilst laughing and joking around on stage.

“In between the songs there was humour, silliness and respect, but as soon as a song began their attention was razor-sharp. It’s so clear to see.

“In terms of staging the concert, we’ve tried to nod our hats to some classic
in-jokes from that time, but this is by no means a carbon copy — I wouldn’t dare!

“It’s not even a tribute act, really. We don’t pretend to be them. We instead try to share our passion for pieces of classic repertory that they sang.

“The Kenton Theatre is quite an intimate venue, so while we do move around on stage we focus more on the music, as they did!”

The concert is being presented by the Henley-based charity Opera Prelude, which specialises in giving young singers a start. A share of the proceeds will be given to the Chiltern Centre, also based in Henley, which helps children and young people with disabilities.

“Three Tenors in Concert” starts at 7pm and has a running time of 115 minutes, including an interval.

Alternatively, tickets can be booked online at www.operaprelude.com