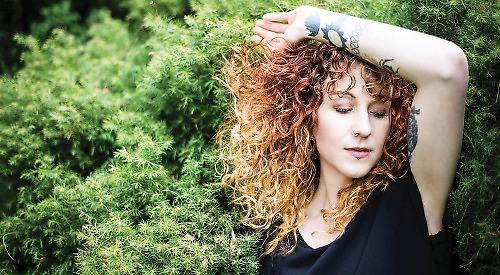 IF ever an artist called on the elements in her songwriting, it’s Henley’s Megan Henwood.

The distinguished singer-songwriter is far too self-deprecating to describe herself as a force of nature, but her third album River — out next Friday (October 27) on Dharma Records — reaffirms her unique ability to create roots music of beguiling purity from what’s around her.

The most mature work yet of an artist renowned for her intoxicating blend of acoustic and electronic ingredients, River depicts Henwood’s lifelong relationship with the rivers and seas that flow into her creativity.

Its alt-folk essence is illuminated with shades of sophisticated jazz and low-key electronica, on a record of dark hues and discreet optimism.

The album, again produced by close collaborator Tom Excell, is the third in a bespoke series that began after Megan won the 2009 BBC Young Folk Award aged just 20, together with her younger brother Joe. Her debut appearance at the Glastonbury Festival duly followed the next year.

On record, 2011’s Making Waves and 2015 set Head Heart Hand were widely applauded for displaing a songwriting and performing maturity beyond her years.

As Megan tells it, the new release came to life in a creative burst.

“We recorded the main bulk of it quite quickly, in just under a month — when you consider that the last one took us 12 months.

“That one took a bit longer as well because my brother’s studio was being built around us as we were recording. But it’s all up and running smoothly now.”

The sessions for River, which was recorded at Henwood Studios in Oakley Wood near Wallingford, had wrapped — when something unexpected happened.

“I went away to celebrate finishing it and wrote another two songs — Join the Dots and Rainbows — and we decided we needed to have them on the album because they finish the jigsaw of it. I was really happy with what we had, but there was something missing in the more universally themed ones.”

Join the Dots, indeed, became the starting point for a voyage full of smoky ambience, lyrical poise and instrumental scope.

Henwood’s touch is as delicate as her imagery, in songs written by a self-confessed lover of language who sings words and phrases you just don’t hear every day.

And who can turn a phrase such as the one in Apples, in which the character regretfully “wipes the tears from her sleeve / it’s where her heart used to be.”

The energy for the entire record comes from the water. Perhaps we shouldn’t be surprised, as her dad Colin of Henwood & Dean makes boats for a living.

Specifically, it comes from the water that flows through Oxford, where this often nomadic soul has almost surprised herself by making her home since 2010.

In one song, The Dolly, it’s even the star. “I’ve been here for nearly seven years now. I just love it. It’s just got the balance for me. So a lot of this album is based around Oxford and Cornwall and those places that I resonate with.

“I swim in the river a lot and I grew up by the river, swimming in it, boating in it, looking at the sea. I think I’d find it hard to live somewhere I couldn’t submerge myself.

“It sounds a bit silly, but there’s some kind of calming, rejuvenating feeling of being submerged in water that is part of my survival process.” Even more poignantly, The Dolly was written when Henwood was, technically, of no fixed abode.

“I think I’m a weird dichotomy of needing a base but also enjoying the freedom to wander around the world,” she says now. “The song was just ‘What am I going to do if I have to leave?’ because it’s my anchor. I never really envisaged myself being in that kind of mindset with a place, I thought I’d be here a couple of years and go somewhere else.”

A genuine troubadour, her travels had her recording in Kathmandu, driving across Europe and Asia and becoming a “full-blown gypsy” for a while, in her own 1972 vintage Airstream caravan.

“I spent an amazing summer in it — I went to about 15 to 20 festivals and then settled in a field just outside Reading,” she recalls. “I had the river on one side and the canal on the other, and it was really lovely. But it was lonely.

“It was just not having people around me, and that’s what Oxford brings me. I can be in a field on my own if I walk 10 minutes by the river, or I can be in the centre of town. It has everything I need for every kind of mindset, which is constantly changing inside me. But I loved the Airstream so much and it’s still in the family — my dad’s about to renovate it.”

For all that the recording process was swift, the preparation and development that Henwood put into the source material was as meticulous as ever. “I wrote loads of songs and whittled them down,” she says. “Some of them had three or four demos for different ideas of places we could take them, production-wise.

“So Tom and I went back and forth and listened because we had a pretty planned idea of what we had to do once we got into the studio. Because we’ve worked a lot together, we can bounce off each other in an effective way now. Plus he’s an absolute genius.”

For Henwood, the understanding has to go beyond a merely musical relationship.

“There’s merit to working with people you’re familiar with that know what you want to achieve — not just as a musician but as a human being,” she says. “Also knowing that they’re fully respected and admired within that space, their input is incredibly important to me.

“On this record and the one before, I had a good balance of people that I felt were the anchors I’ve worked with for so long, and we can communicate really well, along with a few people that bring that new sparkle, that I haven’t worked with before. Those sessions are always really exciting.”

One such guest is Jonny Enser, whose marvellous trumpet detail adds even more lustre to the already gleaming album highlight, Fresh Water. “I’ve known him for a while — he’s in my brother’s band,” says Megan. “But he’s done lots of sessions for people and I know and he writes as well — he’s an amazing musician.

“That solo was really facilitated for Jonny. We had to have more of him. Everyone raised their eyebrows a bit when I suggested trumpet on that song in the first place.

“I remember on one of the demos I did this terrible mouth trumpet, where I pretended to be playing it, and no one could quite understand what I was doing.

“But as soon as he came in, he just got it and ran with it and it’s incredible. I hope it works, and I feel it does — it just opens it up a bit.”

That’s this album all over — it’s like a rambling house with a mixture of old and new furniture where the woodwork of folk tradition sits comfortably alongside experimental pieces of modern art.

Megan will start decorating them soon, in live performances that will stretch into 2018. River is about to flow freely.

• Megan Henwood plays the Holywell Music Room in Oxford, on Tuesday, October 31, followed by South Hill Park in Bracknell on Wednesday, November 8, and St Pancras Old Church in Camden Town on Monday, November 27. The London date is with her full band. For more information — including a full list of tour dates — visit www.meganhenwood.com