...and they've spotted some new musical talent too 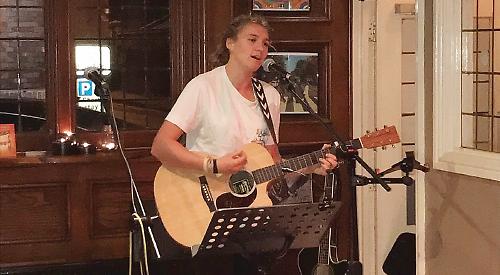 A TEENAGE busker was invited to play a gig at Henley’s Queen Victoria pub after being talent-spotted by its new landlord.

Katie Green, from Shiplake, was performing outside NatWest Bank in Market Place when she was approached by Jamie Liston, who has recently taken over the running of the pub behind the town hall.

By coincidence, it was the second time the 18-year-old had been asked to entertain customers at the Queen Victoria.

The pub’s previous landlord Nick Cobb had been similarly impressed by Katie’s abilities.

“Nick gave me my first gig because he saw me busking in the centre and I just kind of went from there,” says Katie, who is a sixth form student at Queen Anne’s in Caversham, where her A-level subjects are economics, history and biology — though not music.

Instead, Katie prefers to channel her musical energies into writing her own songs and expanding her repertoire of covers.

So what sort of material does she most enjoy playing?

“It’s a lot of old rock stuff from the Seventies, kind of music. But I also do more contemporary stuff. The Eagles, I do. I’ll do obviously Oasis. Classic ones. And then I’ll do a bit of Ed Sheeran — because everyone does that.” Having got permission from the town council, Katie normally busks for up to two hours at a time in Market Place.

What’s the most money she has made in a single session?

“Oh, gosh. New Year’s Day, I made probably — it was more than £80. That was about an hour and a half, actually. Because it was getting cold, so I had to leave!”

Since gigging at the Queen Victoria she has also attended the pub’s regular monthly open mike night, which she enjoyed.

“Open mike nights are fun because you get to hear other people and what they’re doing, which is always good because you can get ideas,” says Katie. “Everyone was really nice there as well — I had a really great time.”