Tenors demonstrate the power of three with a flow of melody 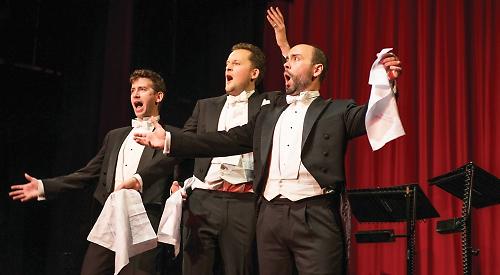 THE Three Tenors in Concert at the Kenton theatre proved to be a real treat for Henley’s opera lovers last Saturday evening.

The show was inspired by the original concerts given by the three great tenors Pavarotti, Carreras and Domingo during the Nineties and the programme included many of the famous songs and operatic favourites from their repertoire.

The three young artists who performed — Alex Haigh, Richard Dowling and Alberto Sousa — are all members of Opera Prelude, the Fawley-based charitable arts organisation which actively promotes the professional development of opera singers in the early stages of their careers.

They took us on a superb journey of song and entertainment. With arias from Italian operas by Donizetti, Verdi and Cilea through to contemporary arrangements of Morricone (Nella Fantasia, The Mission), Schönberg (Bring Him Home, Les Misérables) and Sinatra (My Way) there was a continuous flow of melody from beginning to end.

The repertoire was evenly balanced with the performers having four solo numbers each, interspersed with trios adapted for all three voices.

What was so enjoyable was hearing these very fine voices, all equally impressive and accomplished, yet each one distinctly different in timbre and character from the other.

Alex Haigh entranced us with his first solo, Cilea’s E la solita Storia, a yearning love song with powerful climaxes reaching into the highest register. In contrast his rendition of Tosti’s Ideale was gently expressive and masterfully controlled in the pianissimo passages.

Richard Dowling gave a polished performance of Donizetti’s Una Furtiva Lagrima, the legato phrasing being well sustained throughout. His romantic style was also evident later on in Bernstein’s Maria (West Side Story), which he sang with suitably innocent wonderment.

Alberto Sousa’s Granada meanwhile roused the audience with its flamboyance and dance-like energy. In Dalla’s Caruso, which topped the Italian charts in 1986, we heard the full passion and power of Sousa’s thrilling voice — fantastic!

As well as the wonderful singing there were also clever choreographed routines and humorous acting.

In Denzo’s Funiculi the audience was encouraged to join in with the “Funiculi, funicula” chorus. Verdi’s famous Drinking Song (with the audience la la-ing the link between verses) took us into the interval, during which drinks were indeed enjoyed by one and all.

The singers were very fortunate to have Natalie Burch playing with them. Her piano accompaniments were an integral part of the evening and she captured each mood beautifully through the rich array of styles being performed.

Of course, no Three Tenors concert was ever complete without Puccini’s infamous Nessun Dorma and this was to be our final encore, complete with the white handkerchiefs which were a particular feature of Pavarotti’s performance.

The concert, which was a sell-out, was a fundraiser for the Chiltern Centre and was organised by Fiona Hamilton, the founder director of Opera Prelude.

Alex Haigh, who grew up locally, is a patron of the centre, as was his late mother Stella, who died in 2012.

A bucket collection after the concert saw £600 raised and Opera Prelude has since confirmed that a further £500 will go to the Chiltern Centre.

Opera Prelude’s next event is on Friday (November 10), from 10.30am to 12.30pm, at the Christ Church Centre in Reading Road. “A Playlist for Jane Austen” will feature the talents of soprano Sophia Pullen and musicologist Dr Penelope Cave, accompanied by Natalie Burch on piano. Tickets are £20. To book, visit www.operaprelude.com