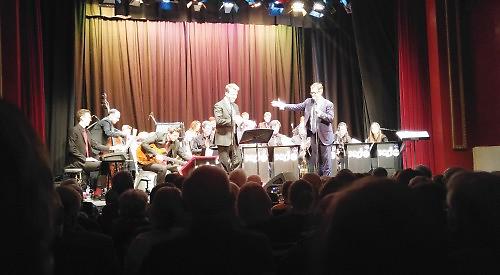 LIVELY cheering, whooping and sustained applause from an enthused full house on Friday evening at the Kenton Theatre marked the end of the encore number — a special arrangement of Georgia.

And the end of a truly remarkable and unique concert in which the National Youth Jazz Orchestra celebrated 100 years of jazz with “A Jazz Centenary”.

This was NYJO’s eighth appearance at the Kenton in as many years, during which period the orchestra’s visit has come to be regarded as the major annual jazz event in the Henley calendar.

The birth of jazz as a form is generally acknowledged to have come with the recording of Livery Stable Blues by the Original Dixieland Jazz Band under Nick La Roca in New York on February 26, 1917.

Paying homage to that epochal event, the orchestra was led by Mark Armstrong, its artistic and music director who is also Jazz Professor at the Royal College of Music.

Seated behind black, white and red music stands, the 22 musicians filled the stage, immaculate in black — the 19 men in red ties.

Mark opened with a bouncy arrangement of WC Handy’s St Louis Blues (1914) with tenor sax (Josh Schofield), trumpet and drum solos. He then described the basic musical structure of original jazz, illustrated with a short version of When the Saints Go Marching In, featuring James Davidson with a formidable sousaphone coiled round his body. This was later followed by another treatment of Saints, demonstrating the necessary transition to a swing/dance style.

Throughout the concert Mark gave a most interesting, humorous and informed commentary about style and the progressive structural changes in the evolution of jazz through the 10 decades, verging on a workshop approach and illustrated by relevant numbers. To add to the diversity, this was cleverly addressed by moving across the decades rather than in a strict sequential order.

Mark used three Duke Ellington pieces to span the move into swing, covering the Twenties to the Sixties with Black and Tan Fantasy, Harlem Air Shaft and Half the Fun — all played with beautiful solos, duets and the power of a big band.

Cole Porter’s upbeat It’s De-Lovely was expertly sung by Freddie Benedict with some impressive scat singing punctuated by Mark’s trumpet. He followed up with a melodic rendering of the Beatles’ And I Love Her played in a Latin style.

The first half closed with the Eighties fast swing number Carmelo’s by the Freeway, which featured a two-flute session and clarinet, another Tom Barford tenor solo and BBC Young Jazz Musician of the Year Award winner Alexandra Ridout with a splendidly versatile trumpet solo.

The second half moved into bebop with Never the Twain, arranged by NYJO alumnus Matt Wates and played in a fast bouncy style including a vibraphone solo, a remarkable display by the two alto saxes of Josh Schofield and Tom Smith — first as solos and then in counter-duet — and finally by Joe Hill working miracles on piano.

Freddie sang I’ve Got You Under My Skin beautifully, very much in the style of Sinatra and accompanied with the famous Nelson Riddle arrangement played impeccably.

Tenor sax player Tom Ridout, who was the runner-up to his sister in the BBC competition, had composed the next number, Is and It — a complex big band piece, melodic and with changing rhythms introduced by a sensitively played French horn solo by Sarah Johnson and building to an emphatic climax embracing trombone, trumpet and sax solos.

A compelling piano entry by Joe Hill introduced Groove Merchant by Thad Jones, a Sixties composition described by Mark as an interesting combination of bebop and blues. Solos included a bass masterpiece by Seth Tackaberry, baritone sax by Lewis Borland and individual contributions from all five trombones. And Mark with an incredible trumpet spot.

Then it was back to the Seventies with Freddie singing a fast and difficult fusion piece with verve — Teenage Kicks by the Undertones — and more scat, with Tom Ridout complementing on tenor.

And so to the finale — a special arrangement by Mark of Tiger Rag. Nobody really knows when it was written but “early” would best describe it. This number had something for all sections who contributed with great energy and skill in a controlled free-for-all – in solo and in combination.

This was a unique concert which I suspect will be long-remembered. A place in the NYJO flagship orchestra is fiercely contested — only the very best make it and that showed on the night.

The skill and precision was exemplary. The unique sound of saxophone, trombone and trumpet choruses together or alone is one of the special sound effects a jazz orchestra can produce and it was used with great skill here.

Mark was inspirational and painted a colourful picture of the evolution of jazz as we know it. His leadership and energy were ever-present.

The audience departed on a high and were already asking about next year!