Singing from the heart brings a lasting moment of total stillness 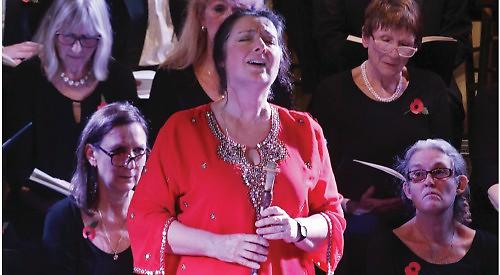 THIS concert by the Aliquando Chamber Choir and an instrumental ensemble was given in aid of the Henley branch of Parkinson’s UK, whose members provided an effective team of stewards and ticket sellers for the event.

In the interval, the work of this busy charity was described most effectively by Dr Terence Dudeney.

Aliquando’s concerts are always a pleasure to attend — the programmes being varied, well-chosen and professionally presented. Music by Monteverdi, Rachmaninov, Fauré, Glinka and Bortniansky comprised the first half of the programme. Sir Karl Jenkins’ Stabat Mater occupied the rest.

From the outset Monteverdi’s Beatus Vir brought out all that is best about Aliquando. It is a small choir, beautifully balanced, with more than its fair share of exquisite voices. This motet was sung in Latin; the first of several languages with which the choir delighted us during the evening.

Her interpretation of Glinka’s Sky Lark was one of the concert’s many highlights. Miss D’Attellis wisely played down the heavy virtuosic potential of the piece in favour of a brilliantly executed, fleeting impression of a skylark on a fine summer’s day. The audience loved it.

Having given due reverence to Rachmaninov’s moving Bogorditse Dyevo in Russian and Fauré’s Cantique de Jean Racine in impeccable French, the choir closed the first half of the programme with Bortniansky’s telling Cherubic Hymn No 7 sung in Church Slavonic.

Their thirst for foreign languages seems endless — and any difficulties that this may pose for the singers are not apparent.

After a truly sumptuous feast of mouth-watering delicacies and wine kindly donated by six local suppliers, the audience settled down to hear Sir Karl Jenkins’ substantial Stabat Mater. This work could be criticised for its tendency towards repetition, but its individual movements have much to offer in beauty, effectiveness and originality.

The unusual percussion section, featuring several ancient instruments, was on top form, playing with immaculate precision, consistency and with a telling presence that was never intrusive.

The rest of the instrumental ensemble could have benefited from a little more rehearsal to tidy up a few loose ends, but individual contributions were excellent.

The sensation of the evening was provided by Belinda Sykes, a versatile musician with special expertise in historical and folk music traditions from around the world. She stunned the audience with her Incantation from the Stabat Mater.

Accompanying herself on the mey (an ancient double-reeded wind instrument) she intoned the call to prayer in Aramaic.

Her semi-improvised appeal, sung from the heart was awesome, touching and induced a total stillness in the church for what seemed like a very long time.

It was a cry of utter desolation — sad, strangely beautiful and unforgettable.