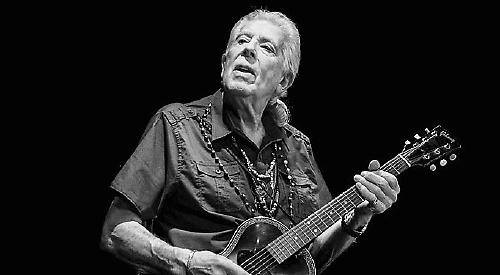 HE nurtured a whole new musical culture, the headmaster of blues-rock with alumni like Eric Clapton, Peter Green and Mick Taylor passing through his training school. We have a lot to thank John Mayall for and we do.

From that came Cream, Fleetwood Mac and Mick Taylor’s period with the Stones. Arguably without it there would have been no Led Zeppelin.

But that was 45 to 50 years ago, that class has grown up and away, although not without leaving us some truly classic blues records and performances.

Now when John Mayall visits us in High Wycombe it’s just him and his excellent rhythm section of Jay Davenport on drums and Greg Rzab on bass.

Can the three of them fill the steamrollering power of the earlier years? Sorry, no!

It’s no longer 1969 when he had astonishing talent queuing up to play behind him, now he has to carry it and he doesn’t have the strength.

His once searing, intense tenor vocals are less secure — in tune but weaker, as you might expect of a man in his eighties. His musicianship was always adequate but never enough to sustain on its own and here there were some embarrassing lapses, particularly in his guitar playing which seemed to slip out of rhythm and had to be rescued more than once by Davenport’s alertness.

Even when it was with the beat, it was little more than a few variations on chords.

This was Mayall doing what he always did before, during and after his encounter with the young guitar turks of the Sixties and early Seventies; he plays and sings the blues.

But with no stars around him to fill it out and intensify it, we’re left with only a shadow cast from the ferocious sun of the Sixties. So the piano arpeggeio’d its way through the songs, sometimes accompanied by mouth organ — that was an area where Mayall excelled in his younger days and maybe there was the flicker of flame when he put it to his mouth this time, but it didn’t last long.

It’s hard for this reviewer to write this because Mayall has legendary status in his mind. This, however, was an ordinary night with no musical spark to speak of — a series of bluesy songs trotted out more in salute of what used to be than what is now.

I shall now dig out the 1967 John Mayall’s Blues Breakers album, the one that changed everything, and play it in the hope that it will wash away this night of ordinariness.