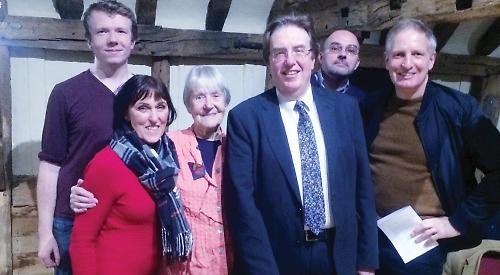 HENLEY MP John Howell attended the first performance of Something Wicked at King’s Arms Barn in aid of the Chiltern Centre for disabled children.

Mr Howell, who is a vice-patron and friend of the centre, off Greys Road, Henley, appealed to the audience to give generously to the collection, entry to the show having been free.

That first audience and the others which followed on the following two nights responded magnificently.

The Jeux d’esprit Company raised £1,950, including a £500 donation from a woman in the audience so moved by the charity’s work.

The light and sound show had audiences chuckling over the the Jackdaw of Rheims and the Diverting History of John Gilpin and laughing outright over Albert and the Lion, superbly narrated by the late Frank Auger.

The longer opening Rossetti poem Goblin Market was much darker and left many of the audience mystified by its Freudian undertones while marvelling at Steve Allender’ss stunning visuals and the Trinity School “Goblins”.

“We are extremely grateful to Jill Richardson and Jeux d’esprit for raising so much money for us in such a delightful way.”