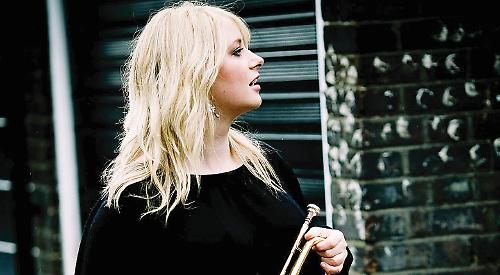 PURDY’S Pop-Up Jazz Club has been packing in audiences for high-quality jazz entertainment since vocalist Rebecca Poole (aka Purdy) opened its doors in September.

In true jazz club tradition, Purdy’s is tucked away at the end of a dingy passage that runs along the side of the Kenton Theatre in New Street, and which leads to the HAODS rehearsal studio — there to enter on Saturday night a room with an atmosphere all of its own and alive to the buzz of anticipation for a special surprise “guest night”.

Purdy’s announcement, in a decidedly croaky voice, that she wouldn’t be singing, brought a groan of disappointment from the standing room-only audience.

But glum faces instantly brightened at the news that we would be treated to an all-star line-up from Steve Rubie’s 606 Club in Chelsea, which recently celebrated its 40th year as one of London’s premier jazz venues.

And what a line-up! Rob Barron on piano, Paul Morgan on bass and Matt Home on drums simply shone with class and polished style as they set the evening swinging and welcomed vocalist and multi-talented instrumentalist Georgina Jackson to the stage for the opening number.

What else but Peggy Lee’s I Love Being Here With You? It was a case of love at first sight. Ms Jackson’s effervescent personality, good humour, impeccable phrasing and beautifully expressive voice instantly won the hearts of everyone in the audience. It’s no wonder her appearance at the 2017 Big Band Prom at the Royal Albert Hall brought so much acclaim.

The magic continued with Where or When, a nod towards Frank Sinatra, before Smile, a number composed by Charlie Chaplin for his 1936 movie Modern Times and played here as a gentle bossa nova, provided the perfect vehicle for the singer to reveal her instrumental skills with a mellow solo on flugelhorn between choruses.

Ms Jackson perfectly captured the cynicism and hard-edged sentiments of Peggy Lee’s first hit, Why Don’t You Do Right?, recorded with the Benny Goodman Band in 1942. “It’s a fusion of jazz and nagging!” she explained.

Fever was an even bigger hit for Peggy, and the audience gladly took up the challenge of clicking their fingers to the distinctive beat — and some even kept it going to the end.

Hoagy Carmichael’s classic Stardust was not only a show-stopper from Ms Jackson’s burnished trumpet but is also the title track of her recent album by the Beat Breast Cancer Big Band.

It was recorded as a thank-you to the Mount Vernon Cancer Centre in Middlesex for the successful treatment of her breast cancer and as a fund-raiser to support continued work in tackling the disease.

I Can’t Give You Anything but Love swung fiercely, with a dazzling extended solo from pianist Rob Barron, after which “Mr 606” himself, Steve Rubie, joined the band to blend his flute with Ms Jackson’s flugelhorn in a slow-paced, sensuous performance of Besame Mucho.

The first set closed with Take the ‘A’ Train bounding along the track at lightning speed, with a marvellous scat solo from Ms Jackson and sharply punctuated exchanges with drummer Matt Home.

Paul Morgan’s gorgeous bass opened the second half with the unmistakeable lines of I’ve Got You Under My Skin, which also featured another elegant solo from Rob Barron.

“You probably won’t have heard this next song before,” Georgina Jackson suggested — and she was right. The Ellington/Strayhorn collaboration He Makes Me Believe He’s Mine seems to have been buried in obscurity since it was recorded in 1947, except for a version by Lena Horne dating from 1952. More’s the pity, for it’s a great song.

Hello Dolly brought a standing ovation from the crowd at a festival Ms Jackson played last summer, and almost provoked a similar response on this occasion. The only difference was that she was playing to a nude audience in July at the Naturist Foundation Jazz and Real Ale Festival.

“Our trombonist has never been the same since,” she quipped, adding: “Do you think this could set a trend for Henley Festival?”

Love Will Keep Us Together took a backward look to the cheesy world of Seventies disco, much loved by Ms Jackson, while Cry Me A River, a duet between the singer and pianist Rob Barron, evoked the torch songs of an earlier era and the famous recording by Julie London.

Steve Rubie rejoined the band on flute for the evening’s final number, Frank Foster’s big band blaster for Count Basie, Shiny Stockings, delivered with all the panache, energy and dynamism of the original complete with thrilling drum breaks from Matt Home.

Of course, the gig couldn’t end there! The encore Stuck in the Middle with You took off in a funky groove, with great solos from each of the band members, and loud audience participation with the lyrics.

Purdy is to be congratulated for bringing the “606 All Stars” to Henley. Meanwhile, tickets are selling fast for the club’s next gig on Sunday, December 31, when Purdy herself will be welcoming in the New Year with the help of her band. For full details and to book, visit www.purdymusic.co.uk/
purdys-popup/nye