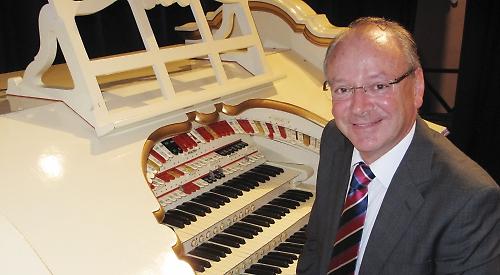 THE resident organist from Blackpool’s world-famous Tower Ballroom will be getting to grips with Henley’s Allen Digital Theatre Organ next month.

Born in Warrington, Cheshire, and today regarded as the UK’s number one theatre organist, Kelsall was inspired to learn the instrument by the late Reginald Dixon — one of his predecessors in the Blackpool role.

In 1975, aged 18, he was appointed organist to the Tower Circus band. He also deputised for Ernest Broadbent in the Tower Ballroom — leading to his taking over the role of principal organist when Broadbent retired.

Famed for his distinctive “Blackpool style” of playing inspired by Dixon, Kelsall has made numerous appearances on TV and radio playing the tower’s 1935 Wurlitzer organ — most notably on the long-running BBC Radio 2 programme The Organist Entertains, which he has also guest-presented.

Kelsall has featured on Strictly Come Dancing during the show’s visits to the Tower Ballroom, and in 2010 he was awarded the MBE.

Tickets for January’s concert are £8 with concessions £7. Doors open at 2.30pm for a 3pm start.

Refreshments will be available and a raffle held.