Wintry duel is the jewel in the crown of Tchaikovsky's opera 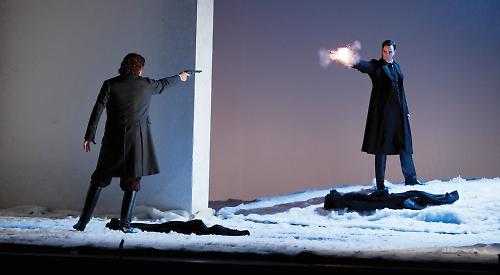 THE Welsh National Opera’s production of Tchaikovsky’s Eugene Onegin, directed by James Macdonald and conducted by Ainars Rubikis, needs to be considered in the context of The New Theatre, Oxford — a venue not designed specifically for opera.

In the absence of a standard orchestral pit, the orchestra sits, somewhat distractingly, between the stage and the audience.

The extra space, however, allows for more players, hence a more solid body of sound than one is used to expecting, and a better listening experience to boot.

The downside is that the singers, unless they are exceptionally strong, risk being drowned out.

The stage has a drawback too. A bank of footlights across the front, with a black backing board, encroaches some distance above the floor of the stage, cutting off the performers’ feet for those seated in the stalls.

Despite such constraints, designer Tobias Hoheisel produced a neat, minimalist set, built round what looked like an angled photograph that proved extremely versatile in the scene changes.

Especially striking was the snowy winterscape created for the duel in act two, which, uncannily true to nature, intensified the horror of the fatal shooting.

The opening dance scene was beautifully executed, as was Stuart Hopps’s choreography in the opera’s two balls.

Here, Tchaikovsky’s extraordinary gift for melody and dance was exemplified in the Waltz and lively Polonaise.

The orchestra, under the supremely authoritative baton of Ainars Rubikis, excelled throughout. There were fine solos from the oboe, clarinet and cello principals.

As for the plot, it had all the ingredients needed for an emotional rollercoaster: undying love declared and spurned, marital jealousy ending in a tragic duel, love rekindled and then extinguished by Tatanya’s agonising rebuff to Onegin as he attempts to prise her away from her husband, Prince Gremin.

The tortured Tatanya was superbly portrayed by soprano Natalya Romaniv. Her 20-minute soliloquy in act one, bemoaning unrequited love, was outstanding. And of all the performers, hers was the only voice able to compete successfully with the orchestra.

Also leaving its mark was the long aria sung by Gremin (bass Miklós Sebestyén) at the St Petersburg ball, in which he expresses his heartfelt praise of Tatanya and the effect she has had on his life.

Ironically, this reflective moment of calm serves only to inflame the heart of Tatanya’s suitor Eugene Onegin, his role taken by the accomplished tenor Nicholas Lester, an able complement to Natalya Romaniv’s dominant presence. Both gave their all, acting utterly convincingly and duetting brilliantly together.

Onegin knew that Tatanya truly loved him but, with honour and marital duty at stake, she stoically resisted. Their anguished closing duet left a scene of utter despair as the final curtain came down on a prostrate, broken Onegin.