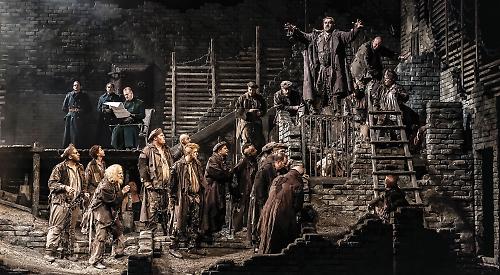 From the House of the Dead | New Theatre Oxford | Wednesday, November 29

CZECH composer Janácek’s final opera From the House of the Dead is not for the faint-hearted.

Based on Dostoyevsky’s prison memoir of the same name, and with an intense score for huge orchestra, it reveals the appalling conditions of a Siberian Gulag and the depths of human suffering.

In a powerful collaboration with Tomas Hanus, the new musical director of the WNO, the daily grind of prison life portrayed on stage was reflected in the intensity of the orchestral writing.

Hanus’s direction was bold and edgy. Being a Czech himself, the music must be close to his soul.

The action, such as it was, focused on individual portraits by three of the prisoners. Stories of the violent crimes that brought them to the prison and interjections from the almost all-male cast presented a vivid picture of poverty and the desperate life of the downtrodden peasant.

Sung in English, diction was excellent from the entire cast. Commanding performances in particular came from Simon Bailey as Shishkov, Alan Oke as Shuratov and Mark Le Brocq as Luka.

It was the interplay of the background choreography with the music that was so powerful.

Timpani represented the whipping of the prisoners counterpointed by the clanking of the singers’ chains on stage.

There were beautiful, plaintive violin solos, and the rhythmic playing was particularly commanding in the piccolos and trumpets.

This production was not without its humour, however. The bucolic pantomime plays in act two provided light relief and we were transported for a time to life beyond the prison.

With the sun streaming in, there was good use of folk tunes in the music — especially splendid in the flute and piccolo.

What makes this piece so moving is the uncomfortable realisation that it is still relevant for us today. The knife plunges into the depths of the human soul and then twists horribly inside.