Concert pianist is keyed up for New Year recitals 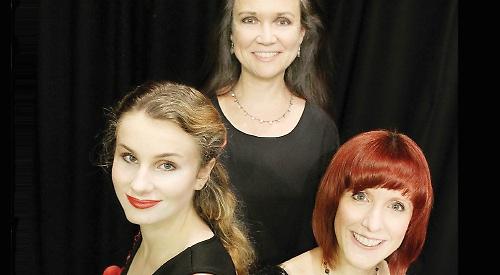 ONE of Henley’s top pianists has announced plans for a series of four “winter recitals” early in the New Year.

Anita D’Attellis’s hope is that the concerts could become an annual fixture — potentially paving the way for a new classical music festival for the Henley area.

As a professional concert musician who also teaches two days a week at Eton College, the 40-year-old is well used to performing solo.

But this latest project, which is the first series of recitals Anita has curated in the Thames Valley, is entirely collaborative and draws on the music world contacts she has made since moving to Henley six years ago.

The venue for the first series of recitals — which begins on Saturday, January 13, at 7.30pm — is the church of St Mary-le-More in Market Place, Wallingford.

Anita, who lives in Norman Avenue with her husband, former Fleet Street photographer John Downing MBE, said: “I’ve wanted to do this for a while, really. Ever since I was at the Royal Academy I’ve wanted to not just do my own thing but to do something that was bigger than me.

“My first intention was to have a Henley Chamber Music Festival — I’d have some high-powered people coming in and all that. I haven’t quite got down to that yet because it takes a lot of sponsorship and you’ve got to have a decent venue.”

As a concert pianist who will be joined by different musicians for all four recitals, Anita said the biggest advantage of St Mary-le-More was the church’s grand piano.

“The set-up is very good and I know people who are involved in the church, which is helpful — because there are no pews, so you can arrange it as you like. It’s quite a warm, modern interior and it’s already got a very nice piano.

“The reason I knew about this piano initially is that I played for Benson Choral Society — that’s where they rehearse. That’s why I know the piano is good. It’s a Yamaha that they’ve got there, which I play anyway. It’s a lovely, cosy venue with a great acoustic.”

While many musicians at the top level have a peripatetic lifestyle, travelling the world to perform at a succession of different venues, Anita prefers to work a little closer to home.

“Well, actually, we were away just this last weekend,” she says. “We were in Germany and I was playing for the London Welsh Male Voice Choir. They had a mini-tour to Germany and you just spend more time travelling than you do music, even if you’re just doing it for the weekend — as I was thinking while we were stuck in a very overcrowded waiting room, waiting for a Eurostar to come back from Paris. So, you know, it’s not for me.”

In choosing not to have an agent, Anita is responsible for managing her own diary and playing commitments over the course of the year.

“I do a lot of different things, actually, because I work as an accompanist, so I play for different instrumentalists and choirs — some locally but also some down in Somerset where I used to be. And then I’m also teaching piano at Eton College, so every week is different — I have some regular work but then different things come up.”

Having started playing the piano and violin aged eight, Anita went on to study music at the University of Birmingham, where she decided to specialise in the piano.

“Playing the violin as well has been helpful because when you’re working with string players you have an affinity with that,” she says. After university, Anita took a performance diploma at the Royal Academy of Music in London’s Marylebone Road, where one of the highlights of each day was attempting to dodge the crowds queuing to get into the nearby Madame Tussauds.

“I stayed in London and was freelancing as an accompanist for a time, but then I got into teaching and I actually had some full-time teaching posts for about 10 years.

“So although I kept up my music on the side, it was kind of like that — on the side. I mean, I was being a music teacher, but unless you’ve got ample time to practise and the flexibility of doing lots of travelling to concerts and all the rest — so I did teach full-time.

“I was head of music in a prep school in Hampstead and then I got this job at Sherborne School for Girls [in Dorset]. I was head of keyboard there and that’s what took me out of London.”

Anita enjoyed teaching — and still does — but says that as a musician part of her wanted more.

“You get to a certain time in your life and I think I was probably early thirties — I was about 30 at the time — and you think, well, I could either just stay being a teacher for ever — you know, in my nice comfortable job — or I could actually really try and be a musician. You know, take it more seriously, dedicate some time to it.

“So after a few years of umming and ahhing like that, I did leave my nice cushy full-time job,” she laughs, “and venture out into the big wide world. I just dedicated more time to playing because really it’s the practising that’s the time-consuming part of it. I’m a good accompanist and I learn things very quickly, so that’s sort of all right.”

When it comes to giving solo recitals, Anita explains that pianists have to memorise their music — the equivalent of an actor learning their lines for a role.

“And for me that takes time,” she says. “Getting back [to music] I was still doing quite a lot of accompanying but not having enough time to do all the solo work. So that’s what I’ve been focusing on in the last few years and getting that back up to scratch.

“Because I like doing everything, you know? I like doing solo work. I like then doing something like these recitals collaboratively with other musicians, because that’s just great fun. And then I do my teaching. So, yes, I’m lucky that I’m doing lots of different things that I enjoy.”

With Christmas nearly upon us, Anita is facing a certain amount of deadline pressure to be ready for the first recital — though it helps that she is the one programming the concerts.

“Because I’ve chosen the repertoire, the pieces are either ones that I’ve played before or that I’m very familiar with,” she says.

Preparation for a solo recital usually takes “a few months” says Anita — and the opening recital in Wallingford is not far off that level.

“In the first concert, for example, which is called ‘Great Russian Piano Trios’, the Tchaikovsky in particular [Piano Trio in A Minor op 50] is fiendish, to be honest — I mean, it’s really, really virtuosic. I haven’t performed that one before but Hannah Roper, the violinist, was really keen to do the Tchaikovsky and she said, ‘I can never find a pianist who is willing to do it because it’s so difficult!’ So I’ll have a very busy Christmas practising for that!”

Then on Saturday, January 27, Anita returns to St Mary-le-More for “Beethoven meets Brahms”, with Colette Salkeld on clarinet and Paul Cox on cello.

Just under a month later on Saturday, February 24, it will be time to “Bring on the Youth” for a concert featuring the Henley Youth Choir, Camille Morana on violin and the 2016 Henley Young Musician Competition winner Matthew Prior on French horn.

The fourth and final recital in the series takes place on Saturday, March 10, and is billed as “Piano duets — double the fun!” Joining Anita for a programme that features works by Mozart, Schubert, Mendelssohn, Poulenc, Brahms and Piazzolla will be her Eton colleague Mila Miletic.

All four recitals start at 7.30pm and will be performed in the round. Tickets are £10 in advance or £12 on the door.

Anita added: “Tickets are unreserved, so do arrive early to secure the best seats. Proceeds will go to the church tower fund.”

For more information, including full programme details for each recital, and to book, visit www.anitapiano.com/winter-recitals