Harpist has battled back ME sufferer's touring once again 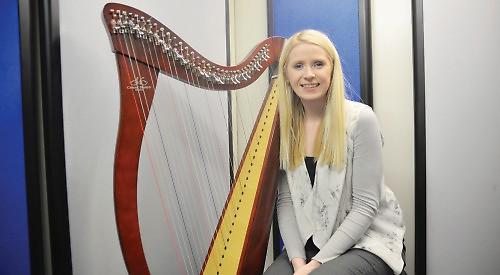 CLAIRE Jones is glorious bubbling proof that life can turn around.

From the wonderful peak of playing the harp at the wedding of Prince William and Kate Middleton her life became mired in a battle against energy-sapping ME — also known as chronic fatigue syndrome.

But this week, as she prepares for a concert return to Henley, it was obvious life could hardly be more in tune for the Welsh musician.

She is now a mother, with her daughter Cadi about to celebrate her first birthday, a new album out and a tour under way.

“There was a time when I was suffering from ME that I thought I would never have a child,” says Claire.

“I just didn’t think I would ever get back to having the energy you need, but now I feel good and life is wonderful. I really haven’t looked back since.”

Speaking to Claire, her accent leaves you in no doubt as to her proud Welsh roots.

“I am doing three trips to America later this year but Henley will always be special to me — it is playing amongst friends.”

Claire still gives harp lessons at Rupert House School in Bell Street a couple of times each term, while her husband Chris — a leading percussionist, composer and arranger — is a regular teacher.

Teaching is important to both Claire and Chris, and in August each year they decamp to Cardigan Castle to hold summer schools in their musical specialisms.

“We both love teaching,” says Claire. “It is a wonderful way to give something back and encourage harp playing.

“A lot of Henley children come on the summer course and while a harp can cost around £1,800 parents can rent one while they find if their child is going to take it up long-term.

As part of her fight against ME, Claire changed her lifestyle and now with her baby on board there is even more reason to plan life carefully.

“Cadi is Welsh for pure and her middle name is Haf which means summer. Both a Chris and I are proud of our Welsh roots and that is why we chose the names. It sounds much more poetic in Welsh — I don’t think we would have gone for a Pure Summer in English.”

The couple live in West Drayton, not far from Heathrow, but Cadi gets to spend a good deal of time in Wales being cared for by Claire’s parents who live in Pembrokeshire. “Where would we be without grandparents? They are wonderful.”

“I have had a number two and a number three — perhaps the next will make number one?” says Claire.

“It is made up of pieces of classical music that are popular at weddings. You may not know the full title of the music but you will know the tune.

“We released it last July on the weekend which is the most popular in the country for weddings — that seemed appropriate.

“The album is very much a joint venture with Chris, who has written some pieces and arranged it. I think people will love the music.”

Claire’s tour is taking in venues as varied as Henley, Brecon and Devon, followed by a concert in Lisbon, Portugal. Then she is off to the States, where she has an enthusiastic following.

To her delight, Claire will next year be appearing at the world-famous Carnegie Hall in New York. “I am really thrilled about that, as it is such an iconic venue.”

In the meantime, pupils from Rupert House will be taking part in the Henley concert, which takes place at the town hall in Market Place on Tuesday, January 30, from 7pm to 9pm.

The school choir will be performing on the night and Claire is clearly relishing the occasion. “It really is a family event,” she said. “I am looking forward to it — it is a lovely venue.”

Tickets are priced £10.84 to £13.39 and can be booked via www.clairejones.co.uk — where full details of her new album can also be found.