BBC award nominees gave up teaching and medicine for music 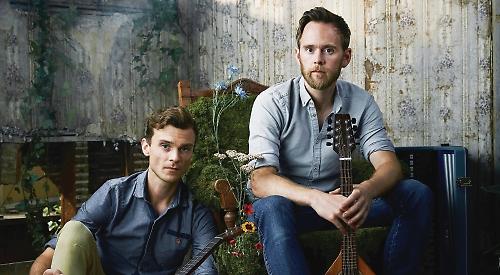 AFTER their explosion on to the folk scene over the past two years, Dorset-based duo Ninebarrow will be performing at Dunsden Village Hall next Friday (January 26) as part of their UK-wide tour of rural venues.

The hall has had a dramatic makeover and this is a first chance to see the impressive work that’s been completed so far. Profits from the event will go towards funding more improvements.

Ninebarrow were nominees at this year’s BBC Radio 2 Folk Awards in the “Horizon” category for best emerging artist.

One of the highest accolades in their genre, it is made even more exceptional because it was only 18 months ago that Jon Whitley and Jay LaBouchardiere gave up careers in teaching and medicine to pursue their unique brand of folk music.

Since the release of their debut album While the Blackthorn Burns in 2014, Ninebarrow have been rapidly fulfilling Shire Folk magazine’s prediction that they will become a major force in English folk music, having meanwhile received high praise from the likes of Mike Harding and folk legends, Seth Lakeman and Kate Rusby.

It is the multi-award-winning duo’s innovative take on the folk tradition that seems to be captivating audiences across the country.

Jon and Jay combine breathtaking vocal harmonies and melodies, delivering songs and that are inspired and rooted in the landscape, history and folklore of the British Isles.

Not only exceptional singers and musicians, they are also equally passionate about the stories behind their songs.

It is this melding of musicianship and their passion for storytelling that is, in the words of Shire Folk magazine, taking this duo “up to the top” of the UK folk scene.

In March 2016, Ninebarrow independently released their second album Releasing the Leaves to high critical acclaim — receiving a raft of glowing reviews, including five stars from both Maverick Magazine and EDS Magazine (produced by the English Folk Dance and Song Society). Receiving airplay on a host of national radio stations across the country, including multiple plays on Mark Radcliffe’s BBC Radio 2 folk show, it was also listed in the Telegraph’s top folk albums of 2016 and featured in five other top 10 album of the year lists.

Tickets for next Friday’s concert are priced £12 and can be booked online at http://buytickets.at/dunsden

There will be a licensed bar with Loddon beer and snacks on sale on the night.

A spokesman for the organisers said: “We’ve been trying to book this entertaining duo for some time and are delighted to offer tickets. It will be an enjoyable evening so don’t miss it!”