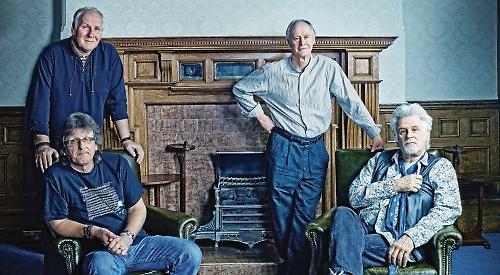 A NEW year of folk music is beckoning courtesy of Nettlebed Folk Club — whose 2018 series of concerts gets under way on Monday night with the return of the Bully Wee Band.

Throughout the Seventies and early Eighties the band were at the forefront of the UK folk music scene — even making it into the Guinness Book of Folk Music.

However, they all went their separate ways in 1983 to have families and work on other projects — and they weren’t to really meet up again until 2004, when Fergus Feely had been booked with Sean Tyrrell for a gig at Faversham Folk Club in Kent.

Ian Cutler, who was the fiddle player in the original Wicker Man film and who had since gone on to play with the violin supergroup Feast of Fiddles, had been contacted by Colin Reece, who had gone on to be the guitarist for Jim Davidson, and between them they decided to go to the folk club and surprise Fergus.

After doing a “floor spot” at the club, which included Fergus, they all decided that maybe they should put the band back together.

Since then they have been rejoined by another founder member, Jim Yardley, who had since moved to Norway and they now tour every January.

So with Colin on vocals and guitar, Jim on mandolin, whistle and vocals, Fergus on cello, mandolin and vocals, and Ian on violin, keyboards and vocals, the band have proved they are still a formidable folk ensemble and entertain both original fans and new with their intricate arrangements, foot-tapping tunes and original songs. They even produced a new studio album, Like the Snow, in 2016.

Folk club organiser Mike Sanderson said: “This four-piece band was known as one of the most exciting on the circuit and now they only tour for a few dates in January, so it’s not one to miss. A rare treat for lovers of a good musical night out!”

Tickets for the concert at Nettlebed Village Club on the high street are £14 in advance and £15 on the door. Doors open by 8pm and the concert starts at 8.15pm. To book, call 01628 636620 or visit the club online at www.nettlebedfolkclub.co.uk

A NEW season of regular folk music nights will also get under way at Norden Farm Centre for the Arts in Maidenhead later this month.

“Folk at Norden Farm” is a series of concerts that sets out to present “some of the very best acoustic folk and roots acts in the country”.

On Sunday, January 28, the Altwood Road venue welcomes John Spiers with Jackie Oates. One of the leading melodeon players of his generation, Spiers is a member of the multi-award-winning band Bellowhead, while Nettlebed regular Oates is the winner of two BBC Radio 2 Folk Awards.