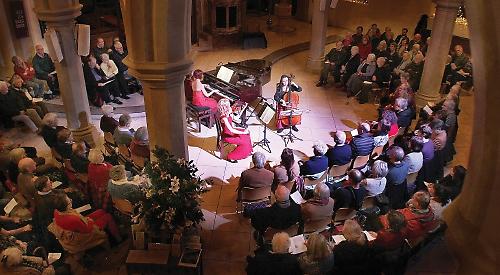 A RECITAL of “Great Russian Piano Trios” at the church of St Mary-le-More in Wallingford proved to be a wonderful way of warming up a freezing winter’s evening.

This was the first in a series of four “winter recitals” curated by the Henley-based concert pianist Anita D’Attellis.

She was joined by violinist Hannah Roper and Oxford-based cellist Jacqueline Johnson to perform a double bill of romantic piano trios by Tchaikovsky and Arensky.

Tchaikovsky’s epic Piano Trio in A minor, op 50 — his only work in this genre — was composed from 1881 to 1882 as a memorial for the pianist Nikolai Rubenstein.

The predominance of the piano writing is testament to this — it is arguably the most difficult piece Tchaikovsky ever wrote and is packed with endless notes, virtuosic octaves and huge double-handed chords which span the whole range of the keyboard.

Anita took all this in her stride and in spite of the rather symphonic style gave a masterful account throughout by fully exploiting the instrument’s sound and colour in combination with her
string-playing colleagues.

Beginning with a darkly brooding opening theme the piece expands into breathtaking lyricism, develops into a series of 12 highly contrasting variations and ends with a grave return of the opening theme in a final funeral march.

The piece provided a perfect opportunity for all three players to demonstrate their excellent musicianship, each fully interacting with the other to give a passionate rendition and leaving the audience feeling a little dazed and in definite need of their interval refreshments!

After the interval came Arensky’s Piano Trio in D minor, op 32, composed in 1894 and dedicated to the great cellist Karl Davydov. In a similar idiom and obviously influenced by his contemporary, Arensky’s music nevertheless has an engaging charm and individuality.

From the yearning opening theme it is clear that the cello takes a leading role in this work — often eclipsing the violin — and we enjoyed hearing more of Jacqueline Johnson’s glowing sound.

Indeed, the scoring is cleaner and lighter overall, allowing each instrument to shine clearly through.

There was total technical command from Anita again as, in the scintillating second movement waltz, the notes were sparkling, trilling and seemingly flying everywhere.

In the heartfelt Elegia, Jacqueline’s lovely solos again set the scene before being reinforced by Hannah Roper’s strong and assured playing. Together there was much interweaving and entwining of parts as the phases rose and fell together.

The turbulent finale was full of rhythmic momentum and cleanly executed stormy passages before suddenly changing in typical romantic style to bring about the sombre ending.

What a great concert and what fantastic playing!

For details of further concerts in the series, visit www.anitapiano.com