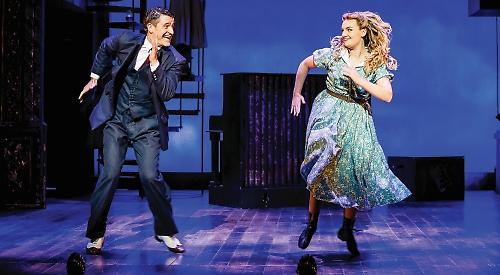 YOU can’t beat some glorious Gershwin and the composer has no greater fan than former Strictly Come Dancing winner Tom Chambers, who is fulfilling a teenage dream by starring in the musical Crazy for You.

By the time the curtain came down on an early Nineties production of the show, a
15-year-old Tom Chambers knew his heart lay in performing.

“Crazy for You was the very first live musical I ever saw on stage and it just filled me with so much entertainment and wonder,” he says. “It was amazing to see what they did with the theatre space and how the story was told. It was the only bit of theatre which truly inspired me.”

The actor is clearly relishing the chance to recapture that teenage dream and this time play the lead role in the production, which is playing at the Wycombe Swan from Tuesday, February 6, to Saturday, February 10, as part of a UK tour.

He plays Bobby, a banker sent to close down a failing theatre who falls for Polly, the daughter of the building’s proprietor. Determined to win her over, he adopts the guise of a Hungarian impresario in order to save the theatre.

And so the stage is set for an
all-singing, all-dancing story set to a Gershwin soundtrack that includes the likes of They Can’t Take That Away from Me, Bidin’ My Time and, of course, I’ve Got Rhythm.

Tom, 40, admits he has always had a bit of a performing instinct — from rattling his feet on the kitchen floor at home from a very young age, and then enjoying watching black and white films starring the likes of Gene Kelly. But it was a school play that saw him tread the boards for the first time.

He recalls: “I was playing football during a school break and the English teacher, who was directing the play, said no one had auditioned for it so there was a compulsory three o’clock audition. I ended up getting the title role in Dracula Spectacular. I loved that relationship recognition between the audience and I — it was fantastic making them respond.”

Drama school followed, which included a stint understudying the late Keith Chegwin in Cinderella at Basingstoke — “It is one of my claims to fame” — while his first job after leaving was a Spanish TV ad for Kit Kat.

“I thought, this is great, I am going to get non-stop work,” recalls Tom. But things did not quite work out like that. He had to turn down a role in The Bill because they needed an HGV driver — although Tom has now got his Class 1 lorry-driving licence in common with boxer Chris Eubank.

And when he turned down a role in the arena tour of Bob the Builder, his agent fired him — leaving him in a quandary about what to do next.

He enjoyed some success with the 2004 Brit-flick Fakers, which was privately financed and enjoyed a limited cinema release, but the work was drying up. So he took one final shot at success by aiming to get on to the Royal Variety Performance in the days before Britain’s Got Talent and YouTube.

He said: “I wrote a Dear John letter suggesting I do a Fred Astaire routine on a drum kit and I thought that might appeal with me tap-dancing and kicking drums at the same time. They said get it ready and I spent nine and a half months doing just that.

“A few weeks beforehand they then got in touch and said we now have everyone we need. We don’t want you. which was a blow. So I got in touch with my old school and asked if I could perform it on their stage in the holidays and I got it filmed in black and white.

“I had 1,000 DVDs made of it, sending 400 to America and sent 600 out in this country to theatre owners, directors and TV producers asking if they were doing anything connected to Fred Astaire and, if so, could I have a chat?”

Only two people came back. One was a theatre producer organising a one-night Fred and Ginger tribute, while Tom said the other was an audition for BBC medical drama Holby City.

“The producers just thought it was so unusual. They were looking for someone to play an American doctor for two episodes. As Fred Astaire was American, they thought I was too and wanted to get me in. I went to the audition and they said ‘Where have you been all these years?’”

From there he won the part of Sam Strachan, staying in the role for three years as the fiercely driven doctor who also had a bit of a roving eye.

His hard-earned success eventually led to him getting a call from the producers of Strictly Come Dancing, where he partnered professional dancer Camilla Dallerup all the way to winning the coveted glitterball trophy.

Looking back on his time on the Saturday night TV staple, he admits a lot of it is a blur.

“People ask if I can do a quickstep or a samba. I have to explain that I had an intensive
five-day workout on each of those routines — it is such a quick
short-term memory injection and that is it. It was a bit like doing a marathon — you do it step by step, doing a couple of miles at a time, and then you look back and you don’t know how you did it.

“It is the same with Strictly. Your body naturally gets used to physical exertion and a daily workout but it is the brain that suffers most because of trepidation, fear and anxiety. You are just learning so much. Then you just go in front of the cameras and the audience and give it your all.

“Looking back now, if I watch anything online of one of our dances, I am looking at it as if I am watching someone else. At the time you are performing your brain is just in flight mode.”

Following his Strictly victory, Tom took the starring role of Jerry Travers in the West End and touring hit Top Hat, which helped make him a sought-after stage performer — although he has recently reprised the role of Sam Strachan for Casualty prior to this Crazy for You tour, which is now set to take up the rest of his year.

Having starred in the Watermill Theatre in Newbury’s 2016 revival of the musical, he is clearly delighted to be reprising the role.

“Taking on Crazy for You was a no-brainer for me. It is absolutely my all-time favourite musical. I always loved the song and dance happy entertainer shows like Singin’ in the Rain, Me and My Girl, and Crazy for You.

“I think Crazy for You has the absolutely perfect balance of humour, story and singing. There are so many musicals that are heavy on just one element but this show has the perfect combination of everything. It’s a bit like the show dance on Strictly, with everything slotting into place in the right order.”

Tom does not want to give too much away about what is in store but it will see him share the stage with actor-musicians so it will be very different to previous productions.

“I don’t want to spoil it for people who may or may not have caught it at Newbury but the audience really took to it. All the traits are there that the other productions had but you also have the cast playing the instruments live on stage as well as singing and dancing.”

Tom also cannot wait to share the show with audiences across the UK.

“The best thing about touring is being able to bring something to you rather than you having to make the epic journey to London.

“Producers eventually want their material there because it is the theatrical capital of the world and is so loved and respected, but as a provider and giver to the public, it is really important to be able to make sure people can see these shows in their own areas.

“And touring is great — you get to see places that you would not normally go. I always love being anywhere near water or being near the sea. I will enjoy the more coastal theatres or those that are close to those areas.”

And as a big fan of the music of Gershwin, Tom is in heaven, getting to perform such hits as They Can’t Take That Away From Me and Embraceable You.

“After seeing Crazy for You as a teenager, I went and bought the original score. I used to have a singing lesson once a week at school and it would be my favourite lesson of the week. When I was at drama school, they used to say ‘Will you stop singing Gershwin?’ I love Cole Porter as well but Gershwin has that sex appeal and more style — more jazz and a bit more pizzazz.”

So this is very definitely a dream role for him. In the words of his musical idol and another hit song from the show, “Nice work if you can get it!”

• Crazy for You is touring to the Wycombe Swan from Tuesday, February 6, to Saturday, February 10. For tickets and times, call 01494 512000 or visit the theatre online at www.wycombeswan.co.uk. For a full list of tour dates and to book, visit www.crazyforyoutour.com