Elvis makes a comeback and it's really something special 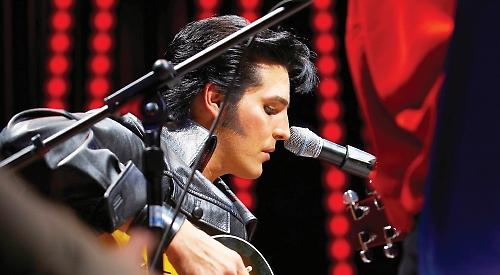 THEY broke the mould when they made Elvis — although there are plenty of contenders for the crown when it comes to his impersonation.

Steve Michaels has poured his heart and soul into this role — and he certainly wears the leather trousers well.

You could already feel the buzz among the audience as the suspense built up for the arrival of the King. Then we were mesmerised as Elvis personified treated us to a blues, rock, country and gospel-filled spectacular worthy of the superstar’s legendary ’68 Comeback Special.

Known as Elvis the Pelvis, there was here plenty of leg-shaking, gyrating and boogieing in the singer’s trademark style — I’d say inimitable, but Michaels does a darn fine job — and judging by the reactions of fans who may be more au fait with the actual era, he was satisfyingly authentic.

Interspersed with jam sessions with his buddies, snippets of the major elements of his life in the background — and a certain colonel — and building up to the Vegas years, we learned that Elvis was a caring individual with a keen sense of fairness.

Evidently Michaels has absorbed all the footage and mannerisms and is devoted as any fan.

Elvis’s love for his mother, the fragility of his marriage to Priscilla and the needs of Colonel Tom Parker all played their part (along with the sadness of being born alongside a stillborn twin).

As the infamous Las Vegas stints loomed, the hits became infused with melancholy as well as delight — after the darkness came the light and upbeat moments.

From Heartbreak Hotel to Hound Dog and All Shook Up, through Little Sister, Always on My Mind, In the Ghetto and Suspicious Minds, and not forgetting Blue Suede Shoes and Can’t Help Falling in Love, Steve Michaels had a lot of hits to cover — and more than enough stamina to do it.

His camaraderie with his backing band and singers and their mutual support made sure they all hit the high notes with powerful results.

As Elvis moved from leather to rhinestone suit, to his musical comeback and career revival, while reflecting on the heartbreakingly short time he was with us, we couldn’t help but smile, bop our heads, tap our feet and clap along, with added whoops of glee and adoration towards the finale — not to mention nearly everyone getting up and out of their seats.

As tributes to The King go, this one was majestic.