Siblings with the X-Factor (whatever that is!) 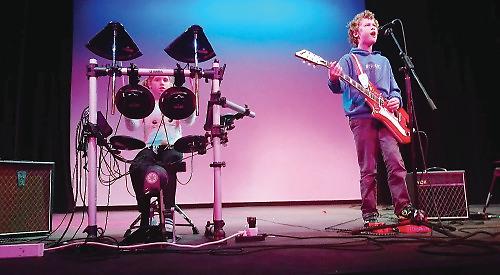 A BROTHER and sister won the first Henley’s Got Talent contest.

Felix and Didi Richardson were among 20 acts that performed in front of 100 people at the Kenton Theatre in New Street on Saturday.

The event was organised by the Mayor Kellie Hinton to raise money for the town’s four state primary schools, her chosen beneficiaries for her year of office.

The siblings won the year five and below category after performing Waterloo Sunset by The Kinks and Seven Nation Army by The White Stripes as the audience sang along.

Felix, 10, sang and played the guitar, which he has been learning for about a year, while eight-year-old Didi was on the drums, which she took up last year.

The children, who live in Deanfield Avenue and attend Sacred Heart Primary School, didn’t even know the event was a competition until they arrived at the theatre.

Felix said: “It felt good to win but it didn’t really matter if we won or lost, it was about playing to the crowd. I quite like Seven Nation Army because it involves doing a guitar solo, which is actually quite easy, and I get to use the whammy and distortion pedals.

“I’d like to be a guitarist when I’m older — that would be brilliant.”

Didi said: “I liked being on stage but I didn’t expect to win.”

The children’s father Matt, who is lead vocalist with Henley band Lucky To Be Alive, said: “They rehearsed for the show every day for two weeks.

“Felix also performed a solo at the Kenton at last year’s Henley Youth Festival Sing. He also plays the drums.

“Didi is also learning the guitar and teaching herself the piano. She has started at Henley Music School and really enjoys it.

“This was Didi’s first public performance. She was so nervous

at Friday’s rehearsal she said she couldn’t do it.

“We spoke to her that evening but on Saturday we still weren’t sure if she would go ahead until just before the performance. I’m so proud of her for doing it.

“We don’t watch television, so Felix and Didi aren’t aware of the
X Factor or Britain’s Got Talent and they didn’t know the show was a competition until the day. I told them not to worry about it and just do what we’d rehearsed.

“For me, it’s just about making sure they enjoy playing and learning. It’s not just about music but the experience of being on stage and performing something in front of lots of people, it doesn’t matter what it is.

“It’s about getting up there and doing your best.”

Angela’s mother Jo said the girls were surprised to win.

“I’m immensely proud of Angel because she’s always had a good singing voice and she actually did something with it and got somewhere.”

The Mayor said: “It was fantastic. The main thing was to have fun and celebrate as well as showcase local talent.

“It was meant to be a one-off mayoral event but because of the amount of enthusiasm the kids showed, it’s something we want to continue to do.”

Councillor Hinton, who performed at the Kenton as a child in the Nineties as part of the Henley Youth Festival, added: “I believe that Henley has got more talent than anywhere.

“Not only do we have really talented kids, we have really determined, focused, beautiful children and it was an honour to be able to display that. My year has been about young people in the town and the schools in particular because they are my chosen charities.”

The money raised will go to the four primaries, Badgemore, Sacred Heart, Trinity and Valley Road, and £1 from each ticket sold will go to the Kenton for maintenance costs. The total has still to be finalised.

The Mayor thanked the businesses that donated prizes for the raffle, which raised more than £200, and Hugh Legh who provided the sound and lighting free of charge.