Orchestra's rhythm of the dance was a winter warmer 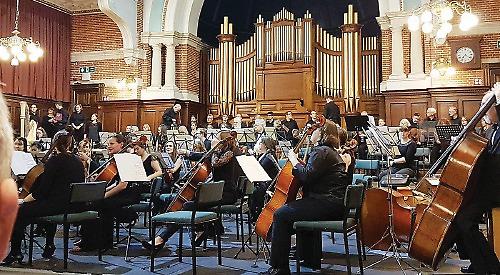 THIS concert had a clear theme to it: dance. Its fiery, virtuosic programme was exactly what was needed to cheer us all up on a wet and dismal night. The orchestra was on good form.

Arturo Márquez’s Dansón No.2 (1994), which astounded the world when the Simon Bolivar Orchestra introduced it as an encore at the BBC Proms, was played con brio by the APO with all the guts and enthusiasm that the piece merits. The complicated rhythms and exacting passagework were delivered confidently and accurately.

But the quieter elements of the music that join the noisier dance sections together needed a more languid, latin touch to them, redolent of warm nights and South American cocktails – with a twist! As the programme notes stated, these linking passages provide breaks for dancers to flirt, chat and find new partners. A little dalliance, a chance to catch the lady’s eye, the hesitation before making a commitment can all be hinted at by soloists taking judicious licence with note length within the phrase. It’s subtle but can have a profound effect, rather like adopting a foreign accent.

Roger May is a well-established British composer whose imaginatively-orchestrated music is immediately accessible to audiences without being trite or typecast. The APO was giving the world premiere performance of May’s Dancing in the Elements that, as its title suggests, represents the four contrasting elements, earth, water, wind and fire.

The composer’s undoubted ability to paint pictures in music was well matched by the orchestra’s sensitive and vivid interpretation of them. Perhaps the second movement, Ripple Effect, was the most evocative. Here the woodwind achieved a gently flowing interpretation that meandered through the underlying orchestral accompaniment like a mountain stream.

Woodwind again took centre stage in the third movement, Breeze In, with an expressive oboe solo over fluttering accompaniment before the percussion and brass ensemble took charge confidently in the final movement, Wildfire! . The audience gave enthusiastic applause to the composer when he was called up to the rostrum.

The APO is planning to perform this piece again soon in collaboration with local dance companies. That is worth looking out for.

The programme concluded with an exciting performance of Rachmaninoff’s Symphonic Dances; a technically demanding orchestral showpiece that takes no prisoners!

It is the strings that take the worst of the punishment from the outset and they matched up to it brilliantly. The APO has a full string complement, well balanced between its five sections and giving a robust, satisfying account of itself when in competition with brass and percussion. The players clearly enjoyed every moment of this. The performance of Rachmaninoff’s final masterpiece was solid and satisfying.

But the main plaudit must go to the percussion section that hardly had a chance to sit down all evening. They were on fine form throughout, always supportive, and never obtrusive except when the composers demanded it. Magnificent!