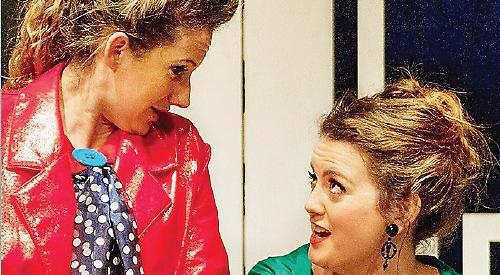 I TRIED hard to like the Merry Opera Company’s production of Mozart’s The Marriage of Figaro at the Kenton Theatre on Friday.

Billed as “opera meets jazz”, I knew to expect something experimental — and Merry Opera are known for bringing something original to their productions.

The simple set immediately evoked the smoky atmosphere of a Sixties jazz club, with musicians on stage. Mozart’s score had been reworked by Harry Sever as a jazz-swing arrangement accompanied by keyboard, double bass and drum kit.

From the opening bars of the famous Marriage of Figaro overture, there was an ambitious combination of musical styles. The original score took a back seat to swing, bebop and twist in the comic and dance sequences, and there were shades of Gershwin, Cole Porter and Duke Ellington in the more soulful arias.

According to the programme, the thought behind this was that in Mozart’s time singers and instrumentalists would have improvised around the written score. The implication, I suppose, is that jazz would complement the classical rhythms and harmonies of Mozart’s music.

However, it simply didn’t work. Despite the excellent playing of the jazz trio, the harmonies clashed and the tight rhythmic structure so intrinsic to Mozart’s music was disrupted by the swing rhythms of the jazz. The result was a mess in which neither Mozart’s music nor the jazz came through.

All credit to the singers who managed to hold their lines as well as they did, despite the lack of normal cues and support from the instrumental lines.

Much of the singing was good, particularly in the ensembles and from the female soloists. Of these, mezzo-soprano Bethany Horak-Hallett was an outstanding Cherubino and soprano Eleanor Sanderson-Nash a beautifully clear-voiced Barbarina.

The best moments were the recitatives where Mozart’s singing lines could be heard to good effect, punctuated only occasionally by a jazz chord.

The individual elements could have been fine on their own, but the two styles together were completely antagonistic.

This was experimental fusion cuisine, but for me the experiment didn’t work. It was like roast beef and pavlova in a blender.