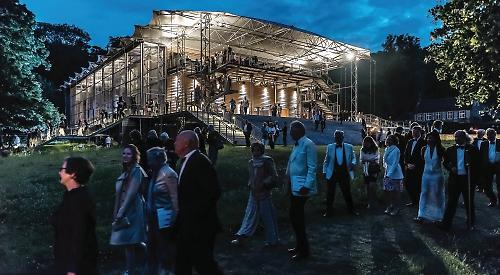 A WORLD premiere of a new opera is being staged at the Wormsley Estate this summer.

Garsington Opera will present The Skating Rink, its first ever festival commission, on a five-night run in July.

It is based on the novel by Chilean author Roberto Bolaño and has been adapted for the stage by leading British composer David Sawer and innovative playwright Rory Mullarkey.

It follows a beautiful young skating champion Nuria, played by Lauren Zolezzi, and her powerful admirer Enric, played by Neal Davies, whose obsession drives him to pilfer funds to build her an ice rink in a deserted Spanish mansion.

A murder on the ice becomes the centre of this 90-minute tale of jealousy, political corruption, and passion.

Garry Walker, the chief conductor of the Staatsorchester Rheinische Philharmonie, returns to conduct and Stewart Laing, who has collaborated with Sawer on previous projects, makes his Garsington Opera debut as the show director and designer.

Nicola Creed, the company’s executive director, says commissioning a new opera was always something they wanted to do.

She said: “We have been in existence since 1989 and part of our ethos is to put on some rare or little played operas as well as the popular ones. We feel this makes us come of age as it is an important thing to have done.

“David Sawer was someone who Douglas Boyd, our artistic director, had been very interested in as he felt that his music would be very appropriate for opera.

“We talked to him about what he would like to do as his chosen subject and he proposed the idea, which was this book called The Skating Rink.

“The book is quite wacky in the way it has been written in that the death happens towards the end of the story.

“It is a slightly weird idea to create a skating rink in a rundown palace ruins and the central character embezzles funds in order to pay for it so the lady, who he fancies, can practise her skating. It is a fairly wacky story for an opera.

“Rory Mullarkey is a young and very up and coming playwright and he agreed to write the libretto for us and has given the story a different structure.

“He has extracted the stories of the three main characters and put them together so that they are three acts and each one is from a different character’s point of view.

“We see the murder in the first act and then the second actor comes through and then we see it from a different point of view with some overlap. What Rory has done is create a more flowing storyline, which can be easily understood and staged.”

The stage will be set out as a camp site, like a Spanish fiesta, and also an ice rink, which you are able to skate on.

Nicola says she has heard “snippets” of the accompanying music and believes it will work well with the story in building up tension.

“It should be very atmospheric,” she says. “The music will be challenging for some with some modern music but it will be wonderfully gripping from start to finish. I have heard some snippets of the orchestration and they will be using a guitar, which is very evocative of Spain, and also some chilly high violin tremolo to build up the tension and make you feel like you are at the cinema.”

The Skating Rink is one of four new productions in Garsington’s 2018 season, which runs from May 31 to July 22 and is sponsored by the JLT Group for the fifth consecutive year.

The first production is Mozart’s Die Zauberflote, or “Magic Flute”, his final opera, which celebrates the triumph of love and reason over chaos and evil.

The Costa Rican soprano Íride Martínez sings Queen of the Night and the Three Ladies will be sung by Katherine Crompton, Marta Fontanals-Simmons and Katie Stevenson, all of whom are alumnae of the Garsington Opera Alvarez Young Artists’ Programme.

The second production, Strauss’s Capriccio sees internationally renowned Swedish soprano Miah Persson make her debut in the role of the Countess with Gavan Ring as the poet Olivier, and Sam Furness, as the composer Flamand, both of whom vie for her love and the primacy of their art.

Douglas Boyd will conduct and international director Tim Albery returns after his 2016 success with Idomeneo. This production represents the start of a new partnership with Santa Fe Opera.

Garsington Opera continues its policy of seeking out the very best singers from around the world as well as showcasing rising stars from Britain. They are joined by the Garsington Opera Chorus and Orchestra and for the performances of Falstaff, the Philharmonia Orchestra.

Patrons can arrive at the estate from 3.30pm to enjoy the gardens and deer park before performances begin in the early evening. They can also have traditional afternoon tea overlooking the cricket pitch, admire the views across the deer park and lake from the champagne bar, or stroll around the opera garden and grounds.

In the long dinner interval patrons can dine in the restaurant marquee overlooking the cricket ground or they can have a picnic by the lake, in the garden or in one of the private picnic tents.

Performances resume as the evening light begins to fade and end around 10.15pm.

New for this season, Garsington Opera has entered into a partnership with Mr Hobbs Gin, which was launched by Hobbs of Henley in May last year. The 45 per cent premium gin will be sold at all its events during this season.

• Tickets for the Garsington Opera 2018 season are priced £110 to £215 (including a suggested non-obligatory donation of £70) and are available from March 20.
To book and for more information such as show dates and times, call 01865 361636 or visit www.garsingtonopera.org