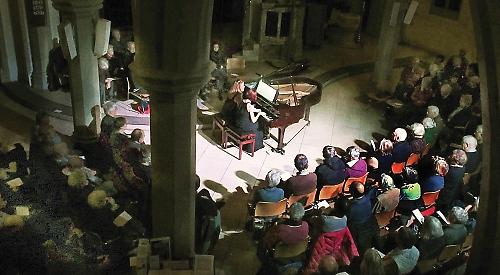 THE last of the four offerings which have served to blow away the winter blues in Wallingford took place on Saturday.

Starting in January, Anita D’Attellis’s series of recitals at St Mary’s have created a refreshing variety of musical contrasts, and provided a much-needed “fix” for regular attendees at the well-established Music at St Peter’s, which offers its annual concert series in Wallingford from May until September.

Having featured the music from the repertoire for piano trios in the first concert, piano and instrumental duets in the second, and showcasing local youth talent in the third, D’Attellis’s final evening of entertainment was entitled “Piano Duets — double the fun!” and covered music composed or arranged for four hands at one piano.

Historically, this format escalated in popularity in the 19th century among enthusiastic amateur players. Playing piano can be a rather lonely pursuit, but two people sharing one piano provides both the fun and challenge of ensemble playing — while, as was noted during Anita’s informative introductions to the music, such close proximity could also provide opportunity for intimacy between the duo. Piano duettists need to be extremely comfortable in each other’s company!

D’Attellis’ partner for the evening was her Eton College teaching colleague Mina Miletic. Diligently sharing the “primo” and “secondo” parts between them, the pair did not disappoint the full house, which began with two duets which many in the audience may well have attempted in the privacy of their own front rooms: Mozart’s Sonata for Piano Four Hands in Bb major, K358, and Schubert’s Fantasy in F minor, D940 — one of the masterpieces of the piano duet repertoire.

Musically, the demands of all the pieces are as virtuosic as any written, and it was electrifying for many of the audience, seated “in the round”, so in close proximity to the piano, to watch the performers’ fingers flash over the keys, perfectly choreographed as they shared the one keyboard.

The most exciting performances of the evening came as the pair tackled a selection from Brahms’s Hungarian Dances, originally composed for piano duet.

Brahms had been inspired by the folk music of the Roma, with many of the dances being directly traceable to Roma tunes. The passion, pride and power of the music shone through in this performance of six of the dances.

Less well known was the Sonata for Piano Four Hands by Poulenc, which had moments of real reflection and calm, contrasting with complicated “cross hands”, and which was a real treat to discover.

The concert officially ended with Argentinian composer Piazzolla’s Libertango, composed in 1974 — a play on the Spanish words for “liberty” and “tango” — which provided full scope for the duettists’ exuberance.

However there was an encore to follow, which served up an extra helping of dance-inspired music — America, from Leonard Bernstein’s West Side Story, arranged in this version for piano duet by Hiroshi Ohtakara.