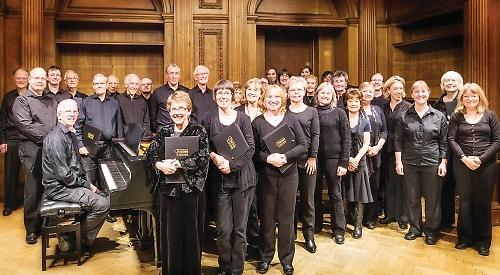 ON the snowiest night of the year — so far! — there was a very good turnout for this special concert, celebrating 50 years of music-making by Thames Voyces.

A feast of much loved gems from the baroque and early classical eras awaited us.

The concert began appropriately with Monteverdi’s Cantata Domino, a short and very beautiful motet for choir that served well to illustrate the fine diction and good balance between the parts that this experienced amateur choir can achieve under its able musical director, Nick Austin, who also provided an effective instrumental accompaniment for the work.

This was performed by the specialist baroque ensemble Musica Poetica, led by Minsi Yang, with the organist Ben Giddens providing the continuo part on the church’s organ.

Following the Monteverdi motet, the history and highlights of the choir’s most notable achievements were recalled by the longest-serving choir member. It was a long and impressive list.

Back to the music!

The choir performed Purcell’s stimulating My Heart is Inditing, composed for another celebratory event, the coronation of James II in 1685. The dignity of this piece was well brought out with smooth lines and clear diction being paramount to convey the solemnity of the occasion for which it was written.

The first half of the programme ended with Vivaldi’s Gloria. This famous hymn of praise in 12 short movements, originally written for an all-female ensemble, included substantial solo parts that were taken on by members of the choir with varying degrees of success.

But the instrumental ensemble excelled here. Musica Poetica provided a perfectly balanced string septet, a spritely oboe and a silvery trumpet that, together with organ continuo, provided all necessary instrumental colour without being overbearing. It was a classic exemplar of “less is more” and a complete joy to listen to.

The concert ended with Haydn’s ever-popular Mass in D Minor, originally entitled Missa in Angustiis (Mass in Troubled Times), but more often referred to as the Nelson Mass. It was Lord Nelson, seeing off Napoleon at the Battle of Trafalgar, that put an end to the “troubled times”.

In those straitened circumstances, the mass was written without woodwind involvement. With the addition of only a second trumpet and tympani to the group, it was in its delightful original form that the mass was performed here.

Elizabeth Adams joined the ensemble to give a crystal clear, definitive and warm account of the substantial soprano part that pervades this work. She was ably supported by bass, tenor and alto soloists in lesser roles who stepped forward within the choir when required.

This mass was the perfect end to the evening’s music-making. The choir and soloist met every challenge. Musica Poetica was wholly supportive and also expert at exploiting baroque style on modern instruments. Time passed all too quickly.

Let us hope that Thames Voyces will hold a similarly joyful celebration in another 50 years’ time.

In the meantime, let it snow...