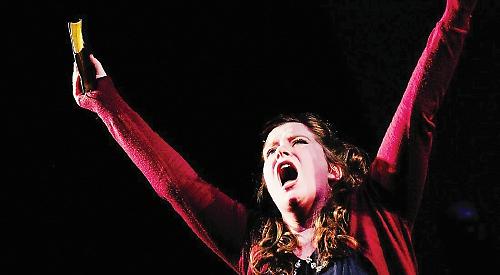 SATURDAY night, snow falling, and a near-full house braved the conditions to be rewarded with excellent performances by Pangbourne Choral Society of Mozart’s greatest choral works — the Solemn Vespers and the Requiem.

PCS, with a singing troupe of 109, were joined by the excellent Southern Sinfonia Orchestra and four young talented soloists — Vanessa Bowers, Daniel Collins, Adam Tunnicliffe and Jonathan Stirland — all performing with PCS for the second year running.

The society’s irrepressible music director Ellie Calver infused the programme with her infectious enthusiasm, evident in passionate choral singing throughout and great interaction between soloists, orchestra and choir.

The opening Solemn Vespers saw the choir stamp their confident authority on the Dixit Dominus and Confitebor.

The well-shaped and expressive phrasing, clear diction, precise entries and finishes were clear testimony to a lot of hard work.

Perhaps the high points were the elaborate fugal singing in Laudate Pueri followed by the deeply romantic, famous Laudate Dominum, in which aoprano soloist Vanessa Bowers demonstrated the extent of her talent most impressively.

The closing Magnificat was strong and well-performed and we were also treated to an excellent performance of the second movement of Mozart’s 21st piano concerto (K467), played by Pangbourne College’s organist in residence, Andrej Ivanovic — followed by Vanessa Bowers with the Exsultate, jubilate (K165).

Both were well supported by the Southern Sinfonia orchestra led by Richard Smith. It was a pleasing interlude between two major choral works and both soloists received richly deserved warm acclaim.

And now came the Requiem, last performed by PCS in 2009. From the opening Kyrie and Dies Irae, PCS performed to the highest standard and were at one with their enthusiastic and highly accomplished conductor, Ellie Calver.

All voice sections were at their best, none more so than the basses, who led us into a quite superb Quam olim Abrahae.

The Requiem looks back to the classical structures of the renaissance and baroque periods and demands precise, well-shaped phrasing, and strongly yet smoothly executed “melismas” (where a choir sings a sequence of notes against a single word or syllable).

It also looks forward to the romantic period and the choir’s interpretation of Lacrimosa was laced with a warm and deep, but well-controlled passion.

It was hard to fault this performance and the four soloists were well up to the mark, notably in the Benedictus.

After such rich entertainment it came as a rude awakening to exit into the cold of winter.

This concert must go down as one of the best local performances that one could hope to see.