Pianist will be cooking with gas at pop-up gig 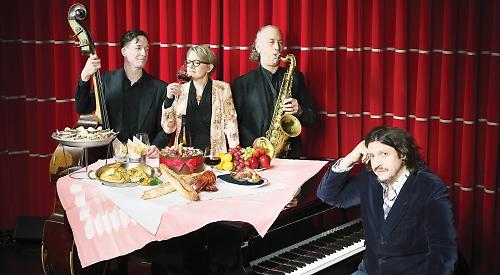 “A NIGHT of food and agony” might be slightly unconventional as sales pitches go — but the first in a series of pop-up events from the organisers of the Henley Festival looks certain to find an audience next month.

A man of many talents, the writer and broadcaster Jay Rayner is perhaps best known as the Observer’s restaurant critic — and latterly as the food reporter on BBC One’s The One Show.

But it turns out that he is equally at home at the piano keyboard, with the Jay Rayner Quartet having released their first album in September last year.

The group have been busy touring in support of it, with Henley’s riverside Phyllis Court Club set to be their latest port of call on the evening of Friday, April 13.

Henley Festival artistic director Stewart Collins said: “Not a lot of people knew that Jay was not just a great food critic and fantastic raconteur but also a great jazz pianist. We’re really looking forward to seeing him and his quartet partners join us for the first in a series of pop-up events.”

Founded in 2012, the Jay Rayner Quartet romps through a live repertoire of two halves.

In keeping with his international reputation as a restaurant critic, Jay will be tackling a number of songs dealing with food and drink — including Black Coffee, The Ladies Who Lunch, Food Glorious Food and It Must Be Jelly (’Cause Jam Don’t Shake Like That).

As the younger son of the late Claire Rayner, who died in 2010 aged 79, Jay also reminisces about his childhood growing up with a mother who was a famous agony aunt and sex advice columnist.

Because, as he says, “so many blues songs sound like a letter to an agony aunt”. Cue tunes like the Leonard Cohen classic Dance Me to the End of Love.

Jay is accompanied on bass by Robert Rickenberg, a formidably inventive player who rose to prominence with the Sheena Davis Group and who has accompanied jazz greats such as Will Gaines and Mark Murphy.

On sax is the highly-regarded Dave Lewis, whose lyrical breaks power the groove in his own band, 1Up and have seen him accompany the likes of Lamont Dozier and Bryan Ferry.

But what completes the show is the vocal performance from the extraordinary Pat Gordon-Smith, who gets right inside every lyric.

Audience members may discern a special chemistry between Pat and Jay — which isn’t surprising as they’re married to each other.

Their musical relationship is in no way nepotism — it’s good fortune. Pat has been singing longer than Jay has been playing, having previously trained with the legendary jazz singer Liane Carroll.

Like his late mother, who published an incredible 90 fiction and non-fiction books during her lifetime, Jay is also a successful author, having penned four novels and five non-fiction titles to date.

His work as the presenter of BBC Radio Five Live’s Papertalk saw him win a Sony Radio Award in 1997, while in 2011 he was awarded the title “Beard of the Year” by the Beard Liberation Front.

His television work — which has in some quarters earned him the nickname “Acid Rayner” — has included the UK version of MasterChef and the daytime cookery show Eating with the Enemy. In the US he was one of the judges on Top Chef Masters.

The box office opening hours are 10am to 5pm on weekdays.