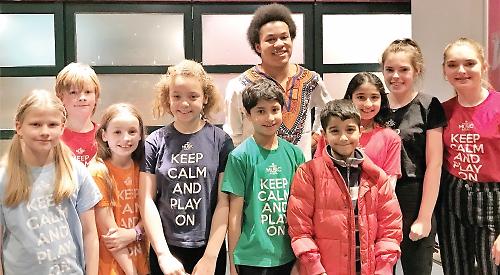 THE Henley Symphony Orchestra likes to do things in style and this concert — its 21st at the Hexagon — was no exception.

It dispatched Mozart’s scurrying overture to The Marriage of Figaro in a businesslike manner, but it didn’t quite sparkle. Possibly the players were holding themselves back — for there were two meaty main dishes to follow.

Elgar’s Cello Concerto holds a place of special affection in the hearts and minds of the classical music-loving British public. To engage the prodigiously gifted Sheku Kanneh-Mason to perform this work was enough to ensure that the concert was a sell-out.

From the moment Sheku played the dramatic opening chord until the final dying note of this great masterpiece the deep concentration of this hushed, awed audience was palpable.

There were no histrionics, no dramatic gestures from this 18-year-old virtuoso. He clearly had a vision of how the work should be performed and he stuck to it consistently with scant regard to the technical difficulties in executing the piece. In particular, the Allegro Molto of the second movement flashed past effortlessly and, to its credit, the orchestra was with him every step of the way.

In the dreamy Adagio, Sheku, playing pianissimo, was able to fill the hall with sound. How did he achieve this dichotomy?

Just as Jacqueline du Pré put her indelible stamp on the Elgar concerto 40 years ago, so Sheku’s vision of it could become the definitive interpretation of it for our age.

Following continuous and very well deserved applause, Sheku gave us a little gem — a reflective encore. It was his own composition.

Sheku’s journey to becoming a world-famous artist with unique talents has only just begun. We have a new rising star in our midst that will be seen from a long way away.

So how do you follow a performance like that? The HSO’s answer was “with Mahler’s First Symphony”. Good choice!

Music director Ian Brown also clearly had a grand plan — for how this fragmentary work should be paced out. It was disciplined and involved keeping the full power of the orchestra’s resources well contained until it could be used to best effect. The results were stunning.

The strings supplied a rich, clear sound that supported every nuance of the brass and woodwind solos. The bowing was immaculate and consistency of interpretation followed as a result.

The eight horns, always having the advantage of being strongly favoured by the Hexagon’s peculiar acoustics, had the time of their lives. Were they trying to bring back Mahler from the dead? It was a good try!

The percussion section kept order from the back of the stage while Brown did the same from the front.

“Mahler’s First” is a difficult work to bring off convincingly. The HSO certainly did so on this occasion.