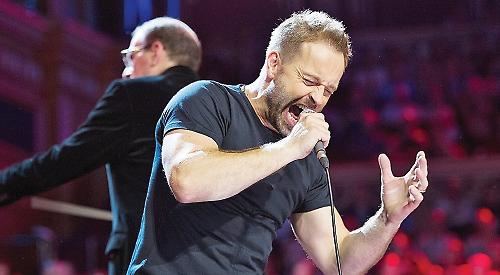 BRITAIN’S biggest-selling tenor Alfie Boe is among the stars of a brand new classical music festival coming to Temple Island Meadows this summer.

Hosted by radio presenters John Suchet and Margherita Taylor, the By The River with Classic FM festival takes place on Saturday, August 11.

The line-up is still being finalised, but others already confirmed to perform include Sir Karl Jenkins, Miloš, Laura Wright, the Royal Philharmonic Orchestra, London Voices and the Royal Marines Band.

Born Alfred Giovanni Roncalli Boe, the 44-year-old tenor and musical theatre star is best known for his performances as Jean Valjean in Les Misérables at the Queen’s Theatre in London, the Les Misérables 25th Anniversary Concert in October 2010, and in the Broadway revival.

He also played the lead role in Finding Neverland on Broadway from March 2016.

Earlier in his career, Boe shared a Tony Award with the other members of the ensemble cast of Baz Luhrmann’s 2002 revival of La Bohème.

From Les Misérables to his recent successful partnership with Michael Ball, the singer has achieved four top 10 albums and has sold more than a million albums in the UK.

A former member of jazz-rock pioneers Soft Machine, with whom he played from 1972 to 1984, the 74-year-old’s best known works include Palladio, Adiemus and The Armed Man: A Mass for Peace, and his Requiem.

Described as “classical music’s guitar hero”, Miloš will be taking to the stage at By The River with Classic FM this August.

He is the first classical guitarist to have performed a solo recital at the Royal Albert Hall.

Soprano Laura Wright is the official anthem singer for the England rugby team. As well as singing at the Rugby World Cup and the FA Cup final, Laura performed a special version of the national anthem for the Queen’s 90th birthday.

Also joining the line-up is the Royal Philharmonic Orchestra. London’s most prolific orchestra is known for the highest calibre of music-making, from world-class concert halls to supporting pop artists in sold-out arenas.

By The River also features the internationally-renowned choral ensemble London Voices, and one of the world’s most versatile military bands, the Royal Marines Band.

The new festival will feature cutting-edge production and visuals to accompany the musicians and the most iconic classical music ever composed, building to a spectacular fireworks finale.

Festival director Neil Wyatt said: “We’re delighted to present some of the greatest classical performers in the world at one of the most unique and beautiful festival sites in the UK, and we’re excited to partner with Classic FM to make it happen. It’s going to be an unmissable and glorious evening of music in the summertime.”

Music lovers at the one-day festival will be treated to the nation’s favourite classical pieces, performed by some of the world’s greatest classical musicians, all accompanied by the finest food and drink from award-winning caterers.

This includes the Farmers’ Market, with the freshest organic produce from local producers, and the World Food Village, for a culinary trip around the globe from hand-picked food specialists.

A range of luxury experiences will be available, including exclusive VIP champagne gardens; chauffeur and river taxi services; premium picnics and also private cabanas with waiter service for up to 10 guests, with the option of their own personal sound system and garden.

Festival tickets are now on sale, priced from £55. To book, visit www.bytheriverfestival.com