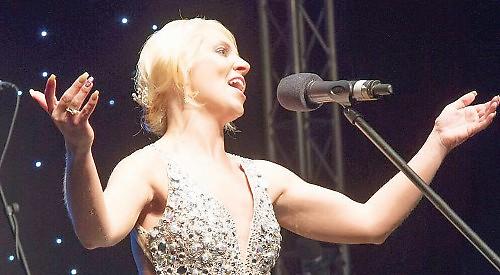 WHEN it comes to singing the national anthem at top sporting occasions, soprano Emily Haig is among the industry’s first-choice vocalists.

Events she performed at last year included the Emirates FA Cup final and Women’s FA Cup final, both at Wembley, and the Rolex British Grand Prix and Ferrari 70th anniversary race meeting, both at Silverstone.

She also sang at the Rugby League Four Nations tournament and for the FIA World Endurance Championship.

But next Sunday (April 8) at 5.30pm Emily is appearing in concert in the much more intimate setting of the Danesfield House Hotel in Medmenham.

Accompanied by her regular pianist Adrian Boynton, she will be performing “Songs from the Musicals” — a selection of West End and Broadway musical theatre favourites.

Emily says: “I trained as a singer and dancer in musical theatre and although I also perform classically this will be a lovely event with songs everyone is familiar with, but I will also be introducing the audience to some new numbers which they may not know. My songs come from Follies, Evita, Ghost, Gypsy, Carousel and many more.

“Guests can enjoy either a delicious afternoon tea or supper as part of the concert ticket and I am really looking forward to meeting everyone and sharing my love of musical theatre.”

This year has got off to a flying start for Emily, as she has already sung at the FA WSL Women’s Continental Cup final and the Vitality International netball series at the Olympic park — where she performed on behalf of the Australian and New Zealand teams.

Next Saturday, the day before her Danesfield concert, Emily will be in action at the PredictorBet Ice Hockey Championships at the Motorpoint Arena in Nottingham.

A royal connection came last year when Emily welcomed Prince William to the MK Rose with a rendition of Amazing Grace. She had previously recorded commemorative lullabies in celebration of the births of Prince George and Princess Charlotte.