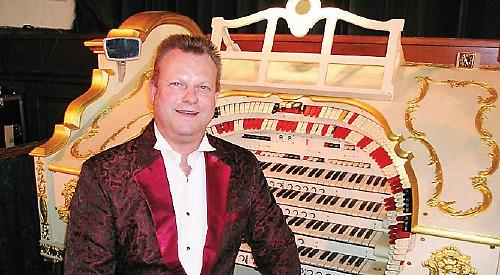 AN organist whose distinctive North Yorkshire humour has made him one of the most popular players on the national circuit is performing at the town hall next weekend.

Andrew Nix is in concert on Sunday, April 8, courtesy of the Henley and District Theatre Organ Trust.

The 49-year-old from Selby has established himself not only as a musician but also as an entertainer.

His varied musical repertoire along with his distinctive humour has made him one of the country’s favourite performers.

It was when he reached the age of 10 that Andrew’s interest in organs became apparent.

His mother had an organ at home and Andrew sat down and learnt several Christmas carols — even though it was the middle of summer.

His parents saw his potential and arranged lessons for him.

Although taught by two different teachers — one being from the classical tradition — Andrew soon developed his own style.

Shortly after leaving school he was offered three nights a week playing in a local club where he accompanied artistes and played for dancing.

This “training” proved priceless and at 17 years old he was appointed organist and musical director of a theatre group performing at Butlins, Barry Island.

Andrew thoroughly enjoyed this position as he was gaining experience and confidence.

After three further seasons with Butlins and one for Haven Holidays Andrew became fully freelance as he was increasingly in demand for concerts and dances nationwide on both theatre and electronic organs. After which he never looked back.

Doors open at 2.30pm on April 8 for a 3pm start. A raffle will be held, with refreshments available.

Entry is £8 with concessions £7 and proceeds from the concert will go to help the Thames Valley Air Ambulance.