Kenton group are saying ‘Hanks for the memories’ 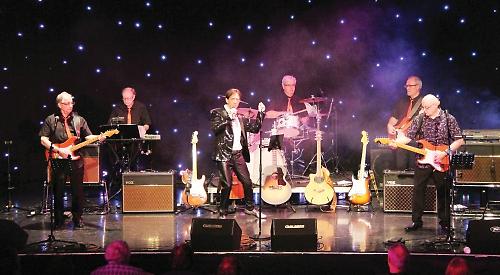 HE was hailed as Britain’s answer to Elvis Presley while they were the band that got excited teenagers wearing black-rimmed specs and frantically strumming tennis rackets.

Cliff Richard and the Shadows dominated British pop in the late Fifties and early Sixties — and six decades later Cliff is still out there wowing the crowds.

Such was their impact on popular culture that even today, dotted around the country, there exists a network of Shadows music clubs where fans of the band’s music get together to play their favourite hits.

This shadowy network has been instrumental in the formation of numerous bands over the years (puns intended). One of which will be celebrating 60 years of Cliff and the Shadows at the Kenton Theatre on Saturday, April 14.

Fronted by Cliff soundalike Simon Goodall, the Bourne Again Shadows take their name from the place where they formed — the village of Bourne End, four miles east of Marlow.

The singer is a native of Ashby-de-la-Zouch in Leicestershire, but the members of the five-piece band — who regularly play theatres in their own right — are based much closer to home in and around the Thames Valley.

None more so than drummer Chris Wright, 67, who lives in The Chestnuts, Lower Shiplake — a part of the world where the competition to be the best drummer is stiff to say the least.

“It used to be my proud boast when I moved to Shiplake, because we had adverts on TV for Carlsberg lager I used to call myself Chris ‘Carlsberg’ Wright — probably the third finest drummer in Lower Shiplake — what with Ian Paice of Deep Purple and Barriemore Barlow of Jethro Tull, very fine drummers, both living in the village. But my son Ian has assured me that I was never even number three, you know?” He laughs gently.

Fame may not have beckoned, but Chris’s lifelong passion for music has served him well. A former career civil servant with the Department of Employment, shortly after moving to the Henley area Chris was seconded to be managing director of a government-funded company specialising in training and small business support.

This experience subsequently inspired him to start his own business in his mid-forties, and in 1996 he founded the DrumWright drum shop based in Headley Road East, Woodley.

The store traded successfully for 20 years, with Chris’s son and fellow drummer Ian eventually taking over the running of the business. But the shop eventually fell victim to web-based competition, closing its doors for the last time in January 2016.

Since when, Chris has been able to concentrate even more on his music — with the result that the Bourne Again Shadows have been going from strength to strength.

On Sunday, July 1, the band and Simon will return to the Mill at Sonning — a venue they have sold out for each of the past four years.

According to Chris, it is not unusual for the Bourne Again Shadows to play venues of 400 seats or more — but he is nonetheless looking forward to playing what for him will be a pair of hometown gigs.

“The Kenton is a hometown gig, definitely. Which is nice, because a lot of people in the area who know me will go. But also, with both the Kenton and the Mill there’s something really nice about playing small venues. You can have a great relationship with the audience — I mean, part of the spark of the night is not just the music, it’s the bit of badinage that goes on with the audience. That said, you have to be careful not to recycle the same corny jokes too often to the same audience!”

Music is intimately linked to memory, and if Chris and his bandmates have a secret of their success, it is their attention to detail when it comes to capturing the nuances of the Shadows’ sound — both live and in the studio.

“If you go on our website there’s a medley of three Cliff numbers with a Shadows instrumental at the end. It’s about five minutes in total and that recording was actually made with a guy called Keith Bessey, who for 35 years was Cliff’s recording engineer.

“He really knew how to set it up and get the mix right and my friend Bob Henrit, who was a big drummer — he played with Adam Faith, Argent, Don McLean and the Kinks — when I sent him the recording, he said ‘When I heard this, I thought I was listening to the originals.’ ”

Another music industry veteran impressed by the band’s fidelity to the Shadows is Henley resident and Kenton regular Mike Hurst.

He said: “As a member of the Springfields I played alongside Cliff and the Shadows in the early Sixties. This band’s tribute to the Shadows is not only faithful but immaculate. Close your eyes and it could be 1960. It’s the real deal and shouldn’t be missed.”

Chris admits the band spend hours before each gig setting up and getting the sound right.

“Our lead guitarist Brian Haycock is the star,” he says. “I mean, I’ve never heard anyone capture the Hank sound and intonation like he does. And we use all the authentic equipment — I use a drum kit that’s made of the same sort of woods that vintage drum kits were made off, so it’s all authentic-sounding in the ear.”

Other chances to catch the band and singer on tour include South Hill Park in Bracknell on April 18, and the Beacon Theatre in Wantage on July 21.

For more information, including a full list of tour dates, visit www.cliffshadowstribute.co.uk