Neo-prog survivors really are worth it 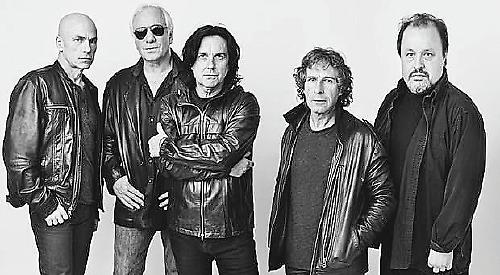 THE Appallingly Disrespectful Spitting Image Book from 1985 contained a spoof article in which Fish, the then lead singer of Marillion, denied that the band’s magnum opus Supper’s Nearly Ready sounded anything like the Genesis 23-minute album one-sider Supper’s Ready.

The joke was clearly by way of alluding to Marillion’s 19-minute Grendel EP B-side, which itself drew some eyebrow-raising and shameless parallels to Peter Gabriel’s era of compositional excess while at the helm of a certain Surrey-based prog rock outfit.

But Marillion’s post-prog ambitions took a new and different turn in 1989 after Fish departed and Steve Hogarth filled the gap.

With his voice lending a more transatlantic feel to the band’s work, some of the old English conventions of pomp rock took more of a back seat on the album Seasons End, released that same year and recorded locally at Hook End Manor in Checkendon.

Hogarth’s expressive vocals fitted the bill and Marillion has, in this “new” form, gone on to record a further 14 studio albums.

A 1,200-strong full house of earnest forty- and fifty-somethings attended Thursday’s show at the Hexagon in Reading — a venue more suited to “table tennis” according to one of Hogarth’s witty asides.

The 16-minute El Dorado from the band’s latest crowdfunded album FEAR opened an 11-song main set, with its sombre prognosis for the future of an England where “the roads are full of weapons” and yielding Floydesque piano motif. The Party, an ode to a teenager’s first night out ending in tragedy, from the excellent album Holidays in Eden, filled the hall with its powerful and insistent refrain, while Steve Rothery’s sparing guitar line on Seasons End hung in the air as if to teeter on the edge of losing the back beat.

The grand and dramatic Sounds That Can’t Be Made with Pete Trewavas’s throbbing bass riffs, the thematically diverse The Leavers with magical light display and Mark Kelly’s hypnotic arpeggios, and Ian Mosley’s complex drum arrangements on the superb Mad all contributed to a set that increasingly throughout the evening brought an intense fanbase to its feet.

The Great Escape from 1994’s album Brave, with Hogarth’s yearning chorus and Rothery’s shrieking guitar, is a no-brainer option for main set-closer.

An hysterical Reading throng urged on two encores, the first of which included the beautiful Easter from Seasons End, and the second Garden Party from the Fish-era debut album Script For a Jester’s Tear.

If you hadn’t heard the singalong outside of loyal fans in the former televised snooker hall by this point in the gig, then you certainly would now.

Marillion are unique. They don’t pander. They play what they want and their show is worth every penny of admission.