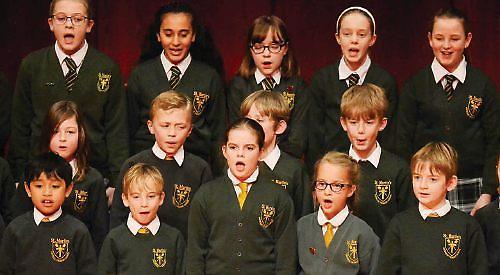 The school’s Glee Club took the title for the second year running against a high standard of competition, performing Gary Barlow’s Sing and a contrasting piece called New Beginnings And Springtime.

The competition judges praised both soloists and the overall performance of the choir but also mentioned their enthusiasm, commitment and musicianship.

The choir received an engraved glass trophy and have been invited to sing at the Mayor’s children’s festival, the Forbury Fiesta, on May 12.

The choir began with just eight singers and has grown to 42, of which one-third are boys. The musicians meet every week, singing a repertoire from film and stage to pop, folk and world music and performing in venues from the Royal Festival Hall to Forbury Gardens in Reading.

The children held a party at the school to celebrate their success and wish their conductor Charlotte Dingley well as she has just left on maternity leave.

Fellow teacher Juliette Williams will take the baton in the meantime.

Let’s Sing was in aid of the Mayor’s three chosen charities.