Musical take on early Eighties classic is up where it belongs 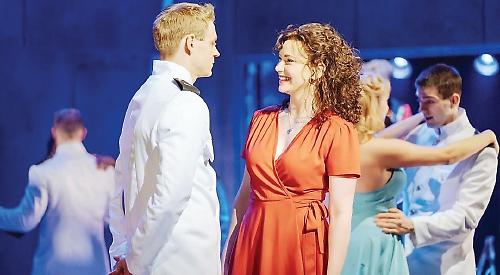 An Officer and a Gentleman | Wycombe Swan | Monday, May 7

THE purists won’t like this — some national critics were really withering — but they can get stuffed: An Officer and a Gentleman is top grade entertainment.

Yes, it’s a jukebox musical trying to shoehorn the 1982 film’s story into a stage format with singing and dancing. But for all that and its obvious eye on the box office it has a big heart.

And what great songs they’ve picked and how well they’ve performed them. Some are close to the originals, others given a new slant and are all the better for it — except for Foreigner’s brilliant I Want to Know What Love Is, which cannot be improved.

There are too many songs to list — 24 of them — but they’re performed with fire and intent. Bon Jovi’s Livin’ on a Prayer, Heart’s Alone and the Wilde family’s Kids in America are standout moments among an excellent and fluent score.

Full marks to musical director Michael Riley and his band for a slick and animated accompaniment.

Modern techniques help to keep the atmosphere alive with a well-used giant video screen projecting film images that dovetail with the music and action.

Haven’t we come a long way since 1982, though! And weren’t there some really great songs from the period! We’ve reached the point with so many thousands, indeed millions, of pop/rock/country songs now available from the last 60 years that you could pick any film or TV programme and find the right tunes to slot in with a little bending here and there.

This worked so well because the leads, Emma Williams and Jonny Fines, are easily up to the task of singing, dancing and acting.

The score drives it on and the narrative slots in comfortably along the way.

It’s not the film by a long way but the stripped down story is still there. And, of course, the ending as the newly commissioned officer gathers his girl up in his arms and whisks her off met with squeals of delight from the audience — 95 per cent women, I calculated.