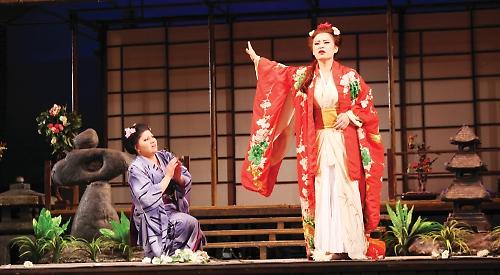 THIS performance of Puccini’s enduring masterpiece was a travelling (one night only) professional Ellen Kent production.

Predictably, it attracted a good audience in Reading that was well served and showed its enthusiastic approval in the final curtain call.

Sadly there is a message for our own time in this anguished tale set in 1900AD, whereby an uncaring irresponsible man from an “advanced, civilised” country takes unfair advantage of a subservient young woman in a foreign land.

He gives no thought to the distress it will engender in her mind, nor how she will survive when he deserts her — as he had planned to do all along.

This performance was a traditional production with a beautiful Japanese stage setting that was a masterpiece in its own right.

The impressive cast list was truly international, including the conductor, Vasyl Vasylenko, whose direction from the orchestral pit demonstrated a profound understanding of Puccini’s exacting score, bringing out the best in the players and the cast.

The young Korean soprano, Maria Heejung Kim, was making her UK debut as Cio-Cio San, the soon-to-be-deserted bride of the feckless American naval lieutenant BF Pinkerton. She was clever at managing the dichotomy of being a 15-year-old child with the voice of a mature opera singer.

She wisely reserved the moments of greatest passion for the point three years later in the opera when, as the mother of a small boy, she had to wrestle with losing her feckless husband and the child in an instant.

The clarity and purity of her voice, evenness of tone and perceptive acting ability all suggest that this debut will not be Miss Kim’s last appearance in this country. We should welcome her back any time.

Cio-Cio San’s maid Suzuki was admirably portrayed by Zara Vardanean. Suzuki’s relationship with Cio-Cio San provided some of the most endearing moments in the opera, with Suzuki having to manage the dual personality of being subservient to her mistress whilst also trying to protect Cio-Cio San from herself and from the consequences of her husband’s infidelity.

The role of the villain of the piece, Lieutenant BF Pinkerton, was taken by Ruslan Zinevych. The faux-passionate side of Pinkerton’s personality was well represented but there is also a cruel, uncaring, self-serving element which was not well portrayed.

The role requires a tenor voice with a strident edge to it that is often conveyed by a slight upwards inflection in the singer’s natural vibrato. Possibly Ruslan Zinevych’s interpretation was too polished to establish this demanding characteristic.

All the other individual roles were very well cast and supported. In particular the baritone Iurie Gisca did an excellent job as Sharpless, the hapless US consul whose friendship with Pinkerton conflicts with Sharpless’s own discomfort over the damage that Pinkerton’s fecklessness is doing to the local population.

We have very few permanent opera houses in this country. Ellen Kent’s touring productions have firmly established a thriving niche market over the last 26 years. We are all much the better for it.