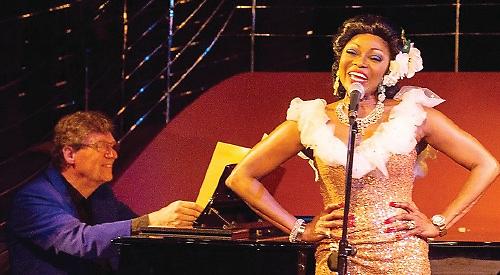 PATTI Boulaye only wanted to look around Madame Tussauds.

Sixteen years old and recently arrived in London from Nigeria, she was on the bus from Ladbroke Grove to Oxford Circus when the course of her life changed for good.

The year was 1973 and Patti, a staunch Roman Catholic, had come to London to stay with her sister while she decided whether or not to become a nun.

A passionate singer since childhood, she had just enrolled for a year at the London School of Dramatic Art — but her course had not yet started when she found herself with a free day.

“What happened was, I got the Shaftesbury Theatre mixed up with Madame Tussauds!” laughs Patti. “That was on the bus. I saw a big long queue and thought it was Madame Tussauds — but it turned out it was for Hair the musical.

“So I joined the queue and about two hours later I got to the stage door — and it turned out to be an audition. I’d never been inside a theatre, so I was still convinced it was Madame Tussauds, actually!

“So they took us in two or three at a time to the green room and I could hear everyone singing — and I thought ‘Why are they all singing the same song?’

“Anyway, it came to my turn and I went on stage and I was asked, ‘Are you a member of Equity?’ And I said, ‘What’s that?’ And they thought it was funny — they thought I was a comedian, actually, was what I was told.

“Because they said I was dressed like I was going for an interview in a bank. Everyone else was hip! I was very smartly dressed but they just thought, ‘Uh oh, we’ve got a right one here!’

“It was Paul Nicholas, funnily enough, who auditioned me. He’s an actor, he’s a singer, he had a few hits, you know? But at that time he was replacing the real director of the show.

“They later did This Is Your Life for him and they brought me on because he told them this story about my audition.

“He said, ‘We just thought she was a live one, you know? Especially when we said ‘What are you going to sing?’ and she said ‘I didn’t come to sing.’ She came to a singing audition and she didn’t come to sing!’” For Patti, the mix-up was to have a happy ending.

“So I sang The Sound of Music anyway,” she recalls. “One verse. And I got the job! The reason they employed me was because they were looking for a soprano and everybody else was singing Aquarius.”

Patti stayed in the cast of Hair for five months before jumping ship for a bigger role in the rock musical Two Gentlemen of Verona at the Phoenix Theatre.

Her first starring role came in April 1975, when she played Yum Yum in The Black Mikado, a musical comedy based on Gilbert and Sullivan’s comic opera.

Three years later, arguably her biggest showbiz break to date came when she won the 1978 series of New Faces with the maximum score of 120 — the only contestant in the show’s history to achieve this. Forty years later, Patti is still performing — and next Saturday (May 26) at 7.30pm the 64-year-old is bringing her latest show to the Kenton Theatre in New Street.

A one-woman show with piano accompaniment from Ronnie Scott’s regular Jamie Safir, Billie & Me will see Patti performing some of her favourite Billie Holiday numbers, including That Ole Devil Called Love, Nice Work If You Can Get It, Lover Man and God Bless the Child.

Eighteen months in the writing, the show will also see Patti talking the audience through the parallels between her own life and career and that of the jazz legend, who died in 1959 aged just 44.

“It was my husband who pointed out at first that they were parallel,” says Patti. “I love Billie’s music but I don’t usually want to know about the lives of the stars whose music I really like because sometimes they become human!”

Holiday, whose real name was Eleanora Fagan, died of cirrhosis, having for many years been a heavy drinker and drug user.

“That’s not a parallel,” says Patti, “but I still parallel that because I use it to give a message to young people about the drugs thing and how easy it is when you become successful to go in that direction.

“I have an inquisitive mind so Billie Holiday is fantastic for me. You want to know why — why does this happen? Why do some people do it and not others?”