Break out the choc ices! We’re creating a theatre to host Willy 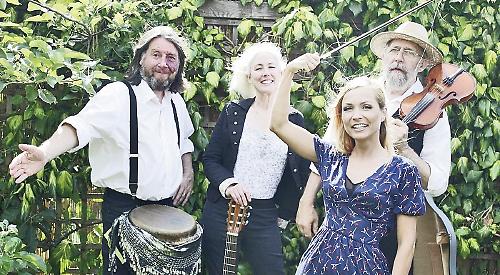 THE enigma that is Wild Willy Barrett first came to prominence on the folk guitar circuit with Ralph McTell, Donovan and Cat Stevens, writes Paul Clerehugh.

Then had punk rock hits as one half of Otway and Barrett, including Really Free, Headbutts and Beware of the Flowers (Coz I’m Sure They’re Gonna Get You Yeah!).

You won’t find another band like Wild Willy Barrett’s French Connection. From a Parisian café via a Dublin hooley to a New Orleans party with rip-roaring fiddle and banjo.

At the ensemble’s heart are the undisputed talents of multi-instrumentalist, the godfather of grunge folk, Wild Willy Barrett. The quartet perform on guitar, cello, harmonium, whistle, fiddle, banjo and uillean pipes with a large dose of dry wit.

The group was born during a chance encounter when Willy approached cellist Mary Holland, who he saw performing with a belly-dance troupe.

John Devine, a master of the uillean pipes, recently performed for the Queen. Of Wild Willy Barrett’s French Connection he says: “It’s unlike anything you will ever see or hear with the range of music and musicianship. Willy holds it all together. He’s one of this country’s most overlooked musicians.”

Willy is best known for his partnership with John Otway. A highly respected musician whose styles include folk, blues, gypsy jazz, reggae, bluegrass and punk. It is the gentler side of Wild Willy that emerges with French Connection.

He recorded Rasta Communication with Sly & Robbie, toured with U2, the Police, Madness and many more. He was guitarist for George Hamilton IV and turned down the offer of being Brian Jones’s replacement in the Rolling Stones. Recorded the Contemporary Folk Guitar album with Bert Jansch, John Renbourn, Gordon Giltrap and Ralph McTell. His recent main stage performances include Cropredy and the Cambridge Folk Festival.

The Crooked Billet enjoys an excellent reputation for its kitchen, cooking and menu. You can choose to enjoy pre-theatre dinner in the pub before or after the show — or simply purchase tickets at £17 for Wild Willy Barrett’s all-acoustic theatre show.

An added bonus for those dining pre-theatre will be live music from The Blue Notes jazz quartet featuring Alan Grahame on vibraphone.

Enjoy a wonderful evening of unique musical entertainment overload with a large dose of humour, very different from anything you will experience in the UK at the moment.

In the meantime, you can catch Paul’s weekly Food on Friday show from 2pm to 3pm on BBC Radio Berkshire 95.4FM and 104.1FM — tune in for recipes, foodie affairs and light-hearted kitchen chat.

You will also find Paul, the London Street Brasserie and the Crooked Billet at the Henley Festival from July 11 to 15. For table reservations, call Paul’s festival booking hotline number on 07379 244926.