TV’s no competition for chamber choir 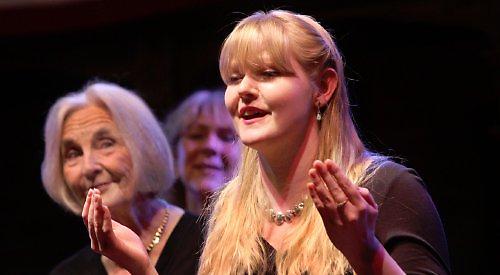 JUST over a year ago Henley’s Aliquando Chamber Choir saw off stiff competition from the Eurovision Song Contest to fill the pews with its themed programme entitled “American Tapestry”.

Always up for a challenge, this year’s themed concert “Northern Lights” squared up successfully to the significant rival attractions of post-royal wedding celebrations plus the FA Cup final to yet again make the Christ Church Centre the place to be.

How do they do it? Simply by singing and playing beautiful music, ancient and modern, superbly in a relaxed but confident manner.

There was no hint of angst in the choir’s delivery. Accuracy of pitch and clear diction were consistently impeccable. Remarkably, balance between the voice parts was even — in spite of the fact that soprano and alto voices outnumbered the tenor and bass departments by a factor of more than two to one.

Conducted by music director Anne Evans, the choir was ably supported by its rehearsal pianist, Joanna Miller-Shepherd, whose accompaniments framed and exactly caught the mood of each piece.

Members of the Millington String Quartet also added nicely woven and tender strands of colour to several songs, but sadly their own contribution — a confusingly mislabelled string quartet by Grieg — was performed carefully, lacking conviction.

The programme began with the enchanting, but rarely heard, vocal version of Ronald Binge’s Elizabethan Serenade, coincidentally performed in its instrumental version earlier in the day at the royal wedding. It was followed by two tender offerings from Elgar — My Love Dwelt in a Northern Land and The Snow.

Eric Whitacre’s Glow followed — a direct reference to the aurora borealis. Then Valentine Ford stepped forward from within the choir to sing the poignant ballade Only in Sleep by Eriks Ešenvalds. Her voice has exceptional clarity and purity that carries well with no hint of harshness or strain.

The first half of the concert ended with My Flame the Song by Ola Gjeilo, a lyrical interpretation of the passionate poem of the same name by Kim André Arnesen.

After an interval of delicious canapés and wine, the highlight from the second half was undoubtedly Meryl Davies’s spellbinding interpretation of Solveig’s Song by Grieg. Accompanied most sympathetically, it was unhurried and utterly beautiful.

In keeping with the evening’s lyrical emphasis, the choir gave impeccable and moving performances of Ye Banks and Braes (Robert Burns), The Seal Lullaby (Eric Whitacre /
Rudyard Kipling) and The Ground (Ola Gjeilo).

Then solos from Dan Evans and Valentine Ford led a rousing performance of the grand finale — Abba’s Thank You for the Music — to which the happy and replete audience contributed a modest verse of their own.

Aliquando always donates the proceeds of its concerts to well-selected good causes. This concert’s earnings were given in aid of the hard-pressed Kamuli Mission Hospital in Uganda whose work and challenges were described ably in a pre-interval address by Dr Philip Unwin on behalf of the Kamuli Friends charity.