Pet Sounds, real ale and a feast of summer festivals 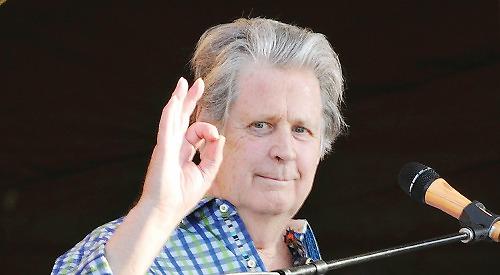 SUMMER is almost here — and that means festival season.

But while the Henley Festival and Rewind are two of the biggest events in the town’s calendar, for those venturing a little further afield there is plenty to look forward to in the coming months whatever your taste in music.

Fans of Nettlebed Folk Club’s regular Monday night concerts are often to be found heading to Fairport’s Cropredy Convention in August, where this year’s opening day headliner is none other than Beach Boys legend Brian Wilson.

The band’s principal songwriter will be performing their 1966 album Pet Sounds in its entirety on Thursday, August 9.

An instant classic, the album was subsequently awarded the number two spot in Rolling Stone magazine’s “500 Greatest Albums of All Time” list — being pipped only by the Beatles’ Sgt Pepper’s Lonely Hearts Club Band.

Folk-punk rockers the Levellers headline the Friday night, followed by Fairport Convention and guests on the Saturday.

Closer to home, Rokefest returns to the 16th century Home Sweet Home pub at Roke near Benson tonight (Friday). Billed as wall to wall music with real ales and pub food on tap, the three-day mini-festival has now been running for 14 years and draws a loyal following.

Tonight’s headliners are The MFU, followed by The Skandal tomorrow (Saturday) and Hustler on Sunday.

A spokesman for the organisers said: “The garden will be fully covered by a marquee, so no need to bring your wellies. Barbecue food will also be available throughout the weekend and there will be a hog roast at 7pm on Saturday.”

Entry is free throughout the weekend, but donations are invited towards a limited-edition wristband in aid of Cancer Research UK. Reusable eco pint cups in aid of the charity will also be available for purchase. For more information, visit www.rokefest.com

Also getting under way this weekend is TwyFest, which starts tomorrow (Saturday) and runs until Sunday, June 3.

This year’s musical headliners include The Wurzels, who are hosting a West Country Cider Night on Friday, June 1, and indie rockers Pop Will Eat Itself, who perform the following night with support from The Complete Stone Roses and Skangsters. As in previous years, the venue for the festival’s main events is a marquee in the garden of the Duke of Wellington pub in High Street, Twyford. For more information and to book, visit www.twyfest.co.uk

There’s more “fixture congestion” in store next month, with the Gap Festival returning to Goring and Streatley from Thursday, June 14, to Sunday, June 17.

A spokesman said: “We have four fabulous days filled with music, words, comedy, literature, visual and performing arts, workshops and much more. Come and listen to amazing speakers, singers and bands, dance the night away, laugh, go to a workshop, follow the art trail and meet the artists, and enter the world of The Wind in the Willows.” For more information, visit www.
thegapfestival.org

Overlapping with the Goring and Streatley event is the Beacon Festival, which returns to Watlington Hill Farm on Friday, June 15, and Saturday, June 16 — two days packed full of music, food and entertainment that will see more than 40 bands playing across the event’s three stages.

Rusty Shackle make a welcome return as headliners on the Friday, with top tribute band The Killerz doing the honours the following night. Other highlights include a Kidzone and a Literary Area. For more information and to book, visit www.beaconfestival.net

It may be a concert series rather than a festival, strictly speaking, but this year’s Nocturne Live gigs at Blenheim Palace boast an almost unrivalled line-up of top name acts.

Running over the same four days as the Gap Festival — June 14 to 17 — the opening Thursday night sees Nile Rodgers and Chic supported by Soul II Soul and MF Robots.

The following night sees Noel Gallagher’s High Flying Birds supported by The Coral, while the Saturday line-up is a mouth-watering triple bill of Elvis Costello, the Waterboys and Nick Lowe.

Take That songwriter’s Gary Barlow’s Sunday night concert in the 10,000-capacity Great Court has already sold out, but tickets are still available for the other three dates at the time of going to press.

Nocturne Live director Ciro Romano said: “We’re confident that the line-up for this year is our strongest to date. In Nile Rodgers, Elvis Costello, Gary Barlow and Noel Gallagher we have four true giants of the music world, each offering something different but all undeniably world class.” Tickets start at £40 from www.nocturnelive.com

Six days later, million-selling pop rockers Scouting for Girls will be bringing the noise when they headline Rugfest at the Hithercroft Sports Park in Wallingford. The two-day event starts on Friday, June 22. Other acts on the bill include Michael Baker, Martin Harley, Rews, The Inflatables, RSVP and Crowmarsh-based jazz singer Fleur Stevenson, who earlier this year guested at Purdy’s monthly pop-up jazz club at the HAODS Studio in New Street.

With the festival set to coincide with the late Wham! legend George Michael’s birthday weekend — he would have turned 55 on June 25 — Rugfest organisers have also booked top tribute act James Bermingham. For more information, visit www.rugfest.org

Less than five miles down the road in Ipsden, 55-acre Braziers Park is the venue for Om & Bass, a community-orientated yoga, wellbeing and reggae festival running from Friday, July 6, to Sunday, July 8. Headlining on the Saturday night is Reading-based reggae sensation Deadly Hunta. For more information, visit www.omandbass.co.uk

Then from Wednesday, July 11, to Sunday, July 15, it will once again be time to don evening dress as the Henley Festival returns to the banks of the Thames. For more on this year’s line-up, see next week’s Henley Standard for part two of our summer festival round-up.