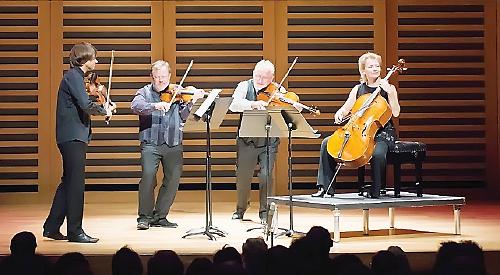 THE internationally renowned Brodsky Quartet performed at the Concert Hall, Reading, last Tuesday. Their programme was based on the fugue and its development from the Baroque era onwards.

The Brodsky, a British string quartet with a formidable reputation, has performed more than 3,000 concerts at major venues around the world and has released more than 60 recordings.

Formed in 1972, violinist Ian Belton and cellist Jacqueline Thomas are its remaining founder members. Violist Patrick Cassidy has been playing for some 36 years, while leader Daniel Rowland is a relative newcomer, having joined in 2007.

The Concert Hall, with its serene ambience and attractive décor, provides a perfect setting for this intimate form of music-making. Indeed, the fine acoustics were complimented by Rowland as he introduced each piece.

Thomas sits on a raised platform while the others stand up — an unusual arrangement but one which allows each person plenty of individual movement while reinforcing the remarkable unity of the ensemble playing.

The concert opened with two pieces from Bach’s The Art of Fugue BWV 1080; Contrapunctus I and VI.

The simple, broad theme of Contrapunctus I, introduced by Belton, quickly gained in momentum and was then imitated by the other players in their own registers, the music building in complexity as no less than 10 entries of the theme were overlaid.

The playing was surprisingly rich and full-bodied with fewer nuances in the balance of parts than one might expect from such a densely-textured piece.

Following on immediately was Contrapuntus VI, its lively rhythmic patterns delivered with great spirit and energy.

Mozart’s Adagio and Fugue in C minor K546 was, in contrast, full of dynamic variation. The playing was elegant with each line being clearly presented. Yet, after the gentle Adagio, it too developed into busy contrapuntal activity with many diverging lines, giving one the impression that there must surely be more than four people playing the piece!

The evening’s centrepiece was Shostakovich’s String Quartet No 8 in C minor. The Brodsky has recorded all the Shostakovich Complete Quartets and this was their most striking performance of the evening.

The piece was composed to reflect the destruction of Dresden and from the opening dark, mournful theme the audience was drawn into this austere and desolate world.

The fast second movement, emerging without pause from the first, pulsed along incessantly with all players delivering the agitated rhythms with tremendous passion and precision. Thomas’s playing of the brooding lament in the fourth movement was exceptionally beautiful, while the gradual dissolution into silence made for the most intense of endings.

Post-interval, we heard the Mendelssohn Fugue in E flat, a glowing interpretation which prepared us nicely for the final piece, Beethoven’s Grosse Fuge Op 133. This was a daringly modern piece for its time and certainly the sound-world is very different to the usual Beethoven one. Once the fugue was in full stride we heard an endless stream of new ideas, all introduced with breathtaking energy and drive.

The encore was the substantial slow movement from Beethoven’s Op130 quartet, played with a calm repose to bring the evening to a perfect conclusion.