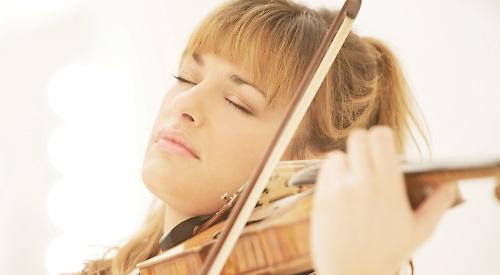 PREDICTABLY, this concert was completely sold out.

Under the auspices of Chiltern Arts, a gorgeous programme of baroque gems was played by the world-famous violinist Nicola Benedetti with the festival’s orchestra in residence, the Academy of Ancient Music (AAM).

The AAM has a delightful air of informality in the way in which it goes about its business. The players so obviously enjoy their work as they duck and weave together to produce a consistently well balanced, rich sound that nevertheless allows individual contributions to the texture to come through clearly. This is a rare trait that can easily be taken for granted.

Now add in Nicola Benedetti’s precocious talent and you have a marriage that, if not made in heaven, comes as close as you can get to that in Dorchester Abbey.

Passages that all too often are made by lesser players to sound “difficult” and “virtuosic” flow from her bow with apparent ease. She produces music — not notes — and, even within the confines of baroque traditions and its strict regard to form. can move the audience with the power of her interpretation.

The slow movement of Vivaldi’s Grosso Mogul concerto was a case in point. This pensive recitative was intensely moving.

But there was no shortage of virtuoso playing too and not just from the principal soloist. The sounds of running scale passages emanating from natural (valve-less) horns were witness to unbelievable dexterity from the players; but it is what was demanded of them in Telemann’s Alster Overture — in effect a suite of nine very short movements that collectively defy a pithy description.

No review of music in Dorchester Abbey is complete without some reference to its extraordinary acoustical properties. It could be said of this building that the audience can get double value out of its ticket money through hearing each note at least twice. This unwelcome echo only imposed itself unfavourably on one work in this concert — the harpsichord concerto where, through no fault on behalf of the performer, Richard Egarr, fast passagework repeated upon itself to muddy the usually crisp percussiveness of that instrument’s delivery.

Special mention must be made of the Telemann Concerto in C Major for four unaccompanied violins. This charming little showpiece was performed by Nicola Benedetti with three superbly matched players drawn from the orchestra. It was perfection — four voices speaking with one mind. The balance, clarity and consistency of the interpretation between the performers left nothing to be desired.

This substantial work involved woodwind and brass in more than just an accompanying role. It was a well-executed offering with Benedetti’s legendary virtuosity in full play but always subservient to her remarkable ability to get to the heart of the music.

An encore was called for and played by the ensemble to round off an evening of musical bliss.